A coil of rope

A rope is a group of yarns, plies, fibres or strands twisted or braided together into a larger and stronger form. Rope is thicker and stronger than similarly constructed cord, string, or twine. 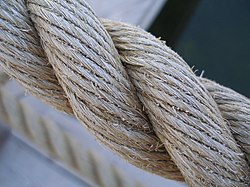 Synthetic fibres in use for rope-making include polypropylene, nylon, polyesters, polyethylene, and acrylics.

But disadvantages of synthetic rope include slipperiness, and some can be damaged more easily by UV light and heat.

Wire rope is made of steel or other metal alloys. Ropes have been constructed of other fibrous materials such as silk, wool, and hair, but such ropes are not generally available.

The twist of the strands in a twisted or braided rope keeps the rope together and ensures evenly distributed tension amongst the strands. Without any twist in the rope, the shortest strand(s) would support a much higher proportion of the total load.

Illustration of the S and Z naming convention

Laid rope, also called twisted rope, is historically the prevalent form of rope, at least in modern Western history. Common twisted rope generally consists of three strands and is normally right-laid, or given a final right-handed twist. The ISO standard uses the uppercase letters S and Z to indicate the two possible directions of twist, as suggested by the direction of slant of the central portions of these two letters. The|handedness of the twist is the direction of the twists as they progress away from an observer. The Z-twist rope is said to be right-handed, and S-twist to be left-handed.

Twisted ropes are built up in three steps. First, fibres are gathered and spun into yarns. A number of these yarns are then formed into strands by twisting. The strands are then twisted together to lay the rope. The twist of the yarn is opposite to that of the strand, and that in turn is opposite to that of the rope. It is this counter-twist, introduced with each successive operation, which holds the final rope together as a stable, unified object.

Traditionally, a three strand laid rope is called a plain- or hawser-laid, a four strand rope is called shroud-laid, and a larger rope formed by counter-twisting three or more multi-strand ropes together is called cable-laid. Cable-laid rope is sometimes clamped to maintain a tight counter-twist rendering the resulting cable virtually waterproof. Without this feature, deep water sailing (before the advent of steel chains and other lines) was largely impossible, as any appreciable length of rope for anchoring or ship to ship transfers, would become too waterlogged -- and therefore too heavy -- to lift, even with the aid of a capstan or windlass.

One property of laid rope is partial untwisting when used. This can cause spinning of suspended loads, or stretching, kinking, or hockling of the rope itself.

Twisted ropes have a preferred direction for coiling. Normal right-laid rope should be coiled clockwise, to prevent kinking. Coiling this way imparts a twist to the rope. Rope of this type must be whipped at its ends by some means to prevent untwisting. 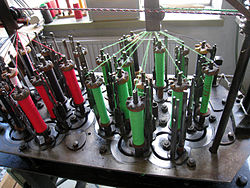 A rope braiding machine at the Arbetets Museum (Museum of Work) in Norrköping, Sweden

While rope may be made from three or more strands, modern braided rope consists of a braided (tubular) jacket over strands of fibre (these may also be braided). Some forms of braided rope with untwisted cores have a particular advantage; they do not impart an additional twisting force when they are stressed. The lack of added twisting forces is an advantage when a load is freely suspended, as when a rope is used for abseiling or to suspend an arborist. Other specialized cores reduce the shock from arresting a fall when used as a part of a personal or group safety system.

Braided ropes are generally made from nylon, polyester, polypropylene or high performance fibers. Nylon is chosen for its strength and elastic stretch properties. However, nylon absorbs water and is 10-15% weaker when wet. Polyester is about 90% as strong as nylon but stretches less under load and is not affected by water. It has somewhat better UV resistance, and is more abrasion resistant. Polypropylene is preferred for low cost and light weight (it floats on water) but it has limited resistance to ultraviolet light, is susceptible to friction and has a poor heat resistance.

Braided ropes (and objects like garden hoses, fibre optic or coaxial cables, etc.) that have no lay (or inherent twist) uncoil better if each alternate loop is twisted in the opposite direction, such as in figure-eight coils, where the twist reverses regularly and essentially cancels out.

Single braid consists of an even number of strands, eight or twelve being typical, braided into a circular pattern with half of the strands going clockwise and the other half going anticlockwise.

In solid braid, the strands all travel the same direction, clockwise or anticlockwise, and alternate between forming the outside of the rope and the interior of the rope. This construction is popular for general purpose utility rope but rare in specialized high performance line.

Kernmantle rope has a core (kern) of long twisted fibres in the centre, with a braided outer sheath or mantle of woven fibres. The kern provides most of the strength (about 70%), while the mantle protects the kern and determines the handling properties of the rope (how easy it is to hold, to tie knots in, and so on). In dynamic climbing line, core fibres are usually twisted, and chopped into shorter lengths, which makes the rope more elastic. Static kernmantle ropes are made with untwisted core fibres and tighter braid, which causes them to be stiffer in addition to limiting the stretch.

In metric systems of measurement, nominal diameter is given in millimetres. The rope sizes can also be expressed as kilograms per metre. 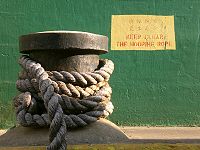 To fasten rope, many knots have been invented for countless uses. Pulleys redirect the pulling force to another direction, and can create mechanical advantage so that multiple strands of rope share a load and multiply the force applied to the end. Winches and capstans are machines designed to pull ropes. 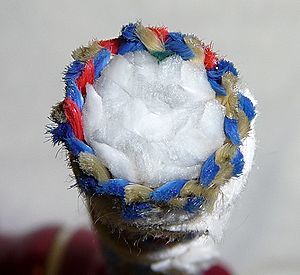 Despite the many falls climbers suffer every year, there are few recorded instances of a climbing rope breaking in a fall; broken ropes can be attributed to previous damage or contamination of, the rope. Climbing ropes do cut easily when under load and so must be kept away from sharp rock edges.

Plaited rope is made by braiding twisted strands, and is also called square braid.It is not as round as twisted rope and coarser to the touch. It is less prone to kinking than twisted rope and, depending on the material, very flexible and therefore easy to handle and knot. This construction exposes all fibres as well, with the same drawbacks as described above. Brait rope is a combination of braided and plaited, a non-rotating alternative to laid three-strand ropes. Due to its excellent energy-absorption characteristics, it is often used by arborists. It is also a popular rope for anchoring and can be used as mooring warps. This type of construction was pioneered by Yale Cordage.

Natural fibre rope made from hemp, cotton or nylon is generally stored in a cool dry place for proper storage. To prevent kinking it is usually coiled. To prevent fraying or unravelling, the ends of a rope are bound with twine (whipping), tape, or heat shrink tubing.

The ends of synthetic fibre ropes are often melted and fused solid.

Ropes need to be inspected for safe use. The typical use to which a rope is put affects frequency of inspection.

Rope fibres are weakened by corrosive liquids, solvents, and high temperatures. Damaged ropes are dangerous to use. Ropes should be stored away from solvents and from corrosive acids, alkalis, and oxidising agents.

A sharp or sudden jolt can cause damage to the rope integrity. Any operation of ropes should obey the principle of safe working load, which is usually much less than its ultimate strength. The rope should be replaced immediately if any evidences of shock load have been found.

Ropes with signs of deterioration should be replaced/discarded or only used for non-load-bearing tasks.

A rope under tension – particularly if it has a great deal of elasticity – can be very hazardous if it should part, snapping backward and potentially causing grave or lethal injury to people, or damage to objects, in its path. There are occasions when it is proper to cut a taut rope under load, but this should be done only when necessary and only with great forethought and preparation for the potential consequences.