A chronology of BP's many visits to Southern Africa 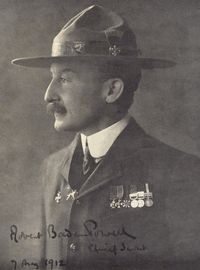 It is probably not a well known that BP visited Southern Africa approximately 12 times between 1884 and 1936, initially during his Army career and then as the Chief Scout.

BP loved visiting South African and in a quote from 1912 BP says: "Of all the stages of my tour the last was the most impressive, and it brought me nearer home, to a land that is like home to me".

Please note that the following information which focuses on the Western Cape was gained solely from records in the Western Cape Scout archives and therefore may be incomplete. (Current place names are in brackets)

BP's first visit to Southern Africa was when the regiment he was attached to, the 13th Hussars moved from India to Natal and was garrisoned in Pinetown. Their role was to assist if necessary in co-operation with Sir Charles Warren's expedition to Bechuanaland (Botswana). Charles Warren laid out the village plan for Mafeking (Mafikeng).

During this period BP carried out a secret 600 mile (960Km) reconnaissance of the Natal frontier and went on a big game hunting trip to Portuguese East Africa (Mozambique) at Inhambane.
Regiment returned to England.
Report

BP's second visit to Southern Africa was when he was appointed Aide de Camp (ADC) to the General Officer Commanding (GOC), South Africa, General H A Smith (his uncle).
1888 Campaigned in Zululand against Dinizulu and acted as military Secretary and as Intelligence Officer to the Flying Column.
Returned to England in 1889 on Sick Leave

Baden-Powell returned to Southern Africa in 1896 to aid the British South Africa Company colonials under siege in Bulawayo during the Second Matabele War. This was a formative experience for him not only because he had the time of his life commanding reconnaissance missions into enemy territory in Matopo Hills, but because many of his later Boy Scout ideas took hold here.
Returned to England 1897 with Cecil Rhodes. .

Returned to Southern Africa for the imminent outbreak of the Boer War and defended Mafeking (Mafikeng). In 1900 he spent some time in Cape Town staying at Government House and returned to England in 1901 on Sick Leave

Boer War ended and BP returned to Southern Africa to conduct Joseph Chamberlain through the Transvaal.
Returned to England in 1903

Returned to SA with the Duke of Connaught and inspected the Cavalry. Returned to England via the Victoria Falls and East Africa.

BP retired from the army in 1910, at the age of 53, on the advice of King Edward VII who suggested that he could now do more valuable service for his country within the Scout Movement.

BP went on a worldwide tour to promote Scouting and his visits included America, Japan, Australia, New Zealand and was in South Africa from 11th July to 7th August.
BP's Report on his visit to South Africa in 1912
Report on visit to Cape Town

With Lady BP and children visited SA, spending seven months travelling 9,498 miles (13,598Km) inspecting Scouts and Guides and promoting the Movement. . During this time their two daughters Heather and Betty went to school at St Cyprians and son Peter to Bishops in Cape Town. The family spent the Christmas holidays in a bungalow at Gordon's Bay.
BP's Report on his visit to South Africa in 1926

BP visited Australia, New Zeeland and South Africa from 9th to 27th June where he addressed meetings and inspected Scouts and Guides.
BP's Report on his visit to South Africa in 1931

On the 19th October 1935 BP left London onboard the SS Mantola. The route to SA was via Suez and the East coast of Africa with many visits along the way.
BP's tour to South Africa in 1935

Upon arriving in SA BP was suffering from Malaria but was able to officially open the first SA Jamboree on 11th January 1936. They spent five months in SA returning to England on the 5th May 1936.
BP's Report on his visit to South Africa in 1936

Under doctors orders to rest BP arrived in Cape Town on 2nd May onboard the Llangibby Castle. Lady BP did however come ashore to attend some Guiding functions. En route they had met their son Peter in Beira and arrived back in the UK on 31st May 1938

On January 8th, 1941, at 83 years of age, BP died. He was buried in a simple grave at Nyeri within sight of Mount Kenya. On his head-stone are the words "Robert Baden-Powell, Chief Scout of the World" surmounted by the Boy Scout and Girl Guide Badges.