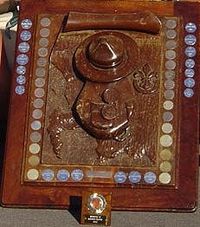 The form of the competition is a weekend of hiking from one base to another, with an overnight camp on the trail. It is aimed at Senior Scouts in the Western Cape. An annual competition (normally at the start of each year) since 1954, it has been held every year without fail, and was named in honour of and as a tribute to Carl "Serpent" Rayner, who was one of SA Scouting's 1908 founder members and main SA Adult Training initiator together with his wife.

About the Rayner Trophy

The Rayner Trophy, usually held in March in the Western Cape, is a senior Scout hiking competition. The competition usually starts at about noon on a Saturday, and ends late afternoon on Sunday. The start and end location is usually only disclosed on Saturday and Sunday respectively. The Chief Judge is also not disclosed until the start of the competition, all to make it more interesting.

The Scouts hike from base to base, with various activities along the way such as:

They may also be requires to complete various Spare Time Activities (STA) such as:

They would usually be required to cook dinner and breakfast to be judged for points.

The history of the Rayner Trophy 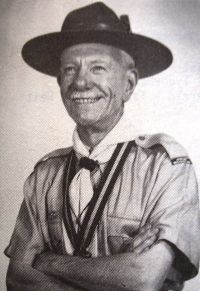 Towards the end of 1953, a group of Commissioners decided to hold and introduce a separate competition for Senior Scouts, to compete for a new Trophy. It was hoped that this competition would give a lead and set a standard for Senior Scout activities in the Division (Western Cape Area). The form of the competition, which over the years has never changed, was to be a weekend of hiking from one base to another, with an overnight camp on the trail. Only one entry per Troop of 4 Scouts was allowed and the ages were restricted to not younger than 15 years and not yet 18 before the competition. The actual place of competing was to be kept secret until after the start, which many times never took place at the original place of meeting.

It was first competed for over the weekend 10 to 11 April 1954, hiking around farms in the Stellenbosch area, with an entry fee of 4/- (4 shillings, approximately 40 cents). Teams had to travel by train to Stellenbosch station for the start at 2pm sharp, in full uniform with staff, knotting rope, pencil, several sheets of half foolscap paper, sleeping kit of a waterproof sheet with sufficient blankets (there were no ‘sleeping bags’ yet), torch, ‘camp’ uniform and personal kit each.

Teams had to supply wax crayons, ingredients for a well balanced breakfast, 25 white cards 2” x 1” (inches convert to 5cm x 2.5cm), ½ pound (500g) Plaster of Paris, a sheet of drawing paper, nature study book (this was later to become a logbook), 50’ (feet convert to about 17m) lariat laid rope 1½” (inch converted 3.7mm) circumference. All kit had to be carried in rucksacks (like a draw-string tent bag) or haversacks and total weight had not to average more than 30lbs (pounds converted 15kg) per team member. The first winners were 7th GASP.

Competitions have taken place in many locations with some many amazing themes, from Gilcape area, Du Toits Kloof to Bainskloof, along many various beaches, Muizenberg to Kalk Bay, on and across Table Mountain range, once on bicycles around Elgin (the start place of this competition with a Siege of Mafeking theme was placed as an ad in the Saturday morning paper just before the competition), Tygerberg Hills, Wolseley area, Tokai to Simonstown, up the Witels River (this was a tough one), Kleinmond, Cape Point, Cederberg area and even on Robben Island. The 1984 Robben Island caused quite a stir when teams were dropped off in the ocean and had to swim about a kilometre with kit to the Island, simulating the British Falkland Island conflict at the time. Another was the 1995 ‘Skeleton Coast’ re-enactment of the ‘Duneden Star’ survivors, getting huge publicity and newspaper coverage at the time as teams were put through ultimate survival challenges at Ysterfontein beach area.

An annual competition (normally at the start of each year) since 1954, it has been held every year without fail, and was named in honour of and as a tribute to Carl "Serpent" Rayner, who was one of SA Scouting’s 1908 founder members and main SA Adult Training initiator together with his wife. Gilray Scout Training grounds in Grassy Park also bears ‘Gilkela’ (as Carls wife was known) and Rayner in the name in their honour.

1st Pinelands holds the record for the most wins over the years, with 22 wins.

See A Tribute to Carl "Serpent" Rayner to find out more about Carl Rayner's life.