The 1969 precursor to the National Senior Scout Adventure[edit] 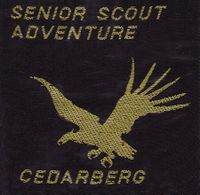 35 Senior Scouts and 7 Scouters from Cape Western set off by car, kombi and ex-army truck for the Cedarberg mountains under the leadership of Divisional Commissioner Colin Inglis, bound for four days of hiking adventure along some of the most beautiful mountain trails in South Africa.

The hike was part of a programme to supply advanced and adventurous activities for senior boys. It also served as a forerunner to the Cedarberg Hike for Senior Scouts, accompanied by their Scouters, which Cape Western Division was planning for January, 1971. 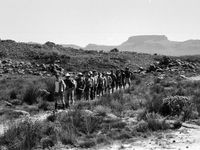 Groups on the way up to Sneeuberg Hut. Tafelberg in the background

The Cedarberg, 240 kilometres North of Cape Town, is a range which stretches 60 kilometres long and about 26 kilometres wide with some of the highest peaks in the Western Cape. Although it borders on the Little Karoo, the vegetation differs widely, consisting mainly of small bushes and heathers; but also there are large expanses of pine forests; oak trees lining the rivers, and at other isolated spots along the trails; flat marshy plains; kloofs overgrown with proteas and other bush; and crystal clear mountain pools along the rivers. (Bilharzia is unknown in the Cape). The area derives its name from the rare Biblical Cedar trees whose twisted and gnarled evergreen branches adorn many of the koppies above 1200 metre. The peaks are extremely barren, but their fascination lies in the weathering of the rocks by many a winter's snow and ice, into indescribable shapes and forms.

On arrival at Alfa, on the edge of the mountains, we split into three hiking parties, each of about 12 Scouts and 2 Scouters, who were experienced mountain leaders. After the evening braaivleis on the banks of the Olifants River, light-weight hike rations were issued for the following three days to each group of four boys. These were pre-packed in Cape Town before departure, and were extremely light, consisting of: soup powders; sweetened cooldrink powders; instant pudding powders; dehydrated vegetables; cracker biscuits and rusks; rice; spaghetti; dried fruit; breakfast cereals; cheese; peanuts; raisons; glucose sweets; and a small amount of tinned meat, amongst other small items. No tentage was taken, rain being unlikely, and caves and huts being readily available.

The Northern party left immediately that night, by kombi, for Heuningvlei Forest Station, 95 Kilometres further by road, arriving at 2am and sleeping alongside the road. In their three days they hiked back southwards, swimming at every possible occasion (15 swims in 3 days!); spending the nights at Boontjies Kloof and Crystal Pool huts; climbing the Krakadouw Peak, and still arriving fresh and full of high spirits at the Algeria Forest Station.

After supper on the first night, the Southern and Central parties moved deeper into the mountains by car, and slept the at Welbedacht Forest Station. Awakening the following morning, they found low mist swirling around the mountain peaks, and were forced to spend a leisurely morning waiting for the cloud to blow away. 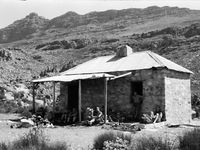 Southern Party at Sneeuberg Hut, where they spent the night. Sneeuberg in background

The Southern party left after lunch along the pathway through the beautiful! Cederhout Kloof, climbing steadily up to the Sneeuberg hut for the night. An early night was had in preparation for the following day which was to be strenuous, with a climb up Sneeuberg at 2025 metre, the highest peak in the range, and a level traverse along the Shale Band to Disa Pool for the night. En route they passed the Maltese Cross, an 25 metre high mass of rock which has proved unconquerable to rock climbers, and is forbidden after a number of serious accidents during attempts to climb it. The last morning was spent lazing, diving, and swimming in the clear green water of Disa Pool before the final walk down valley to the Krom River farm and transport back to base camp.

The Central party set off at the same time as the Southern group and, after leaving their packs at the 1280 metre level of Welbedacht Cave, sprinted the remaining 670 metre up the Tafelberg, roping up the last pitch which is of a "C" standard, and returning to the Cave to sleep. The following morning found them striding Northwards along the Shale Band, around the Langeberg, down Engelsmans Kloof, to Crystal Pool for an afternoon's swimming, where they spent the night. The weather still held out; perfectly clear blue skies, warm and no wind. The final day of their hike, they climbed one of the rock formations known as the Uilsgat Needles, before returning via the Middelberg hut area to the Algeria Station.

While the parties were on their separate hikes, a base camp was established at Sandrif, in the extreme South, under large Oaks, and next to a part of the river where it broadens, and where the swimming is good. The base camp was manned with a first aid post, but was fortunately unnecessary. 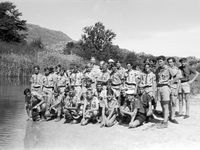 All the groups on the final day at sandrift

All parties returned to base on the third evening: then there was much ado in the river, red glowing coals, the aroma of meat braaiing, sleeping bags laid out early on the clean white river sand, and then at last the snores under the twinkling stars.

The final morning early, found the entire group climbing the Wolfberg Cracks in beautiful weather. These cracks run about 460 metres into the top of the mountain, at times only shoulder wide, and at others almost 15 metre wide. We climbed through the cave entrance to the main crack, and squeezed through the dark and narrow passage-way before emerging inside the mountain with the sky shining through high above us. The crack opens up under a large archway into the adjoining crack which "goes" until you reach the summit. We then descended another crack to our starting point, and then set off down the mountain slopes back to base camp for lunch.

That afternoon we departed for Cape Town after four very enjoyable days in the Cedarberg, taking with us the wish for a return trip in the near future, to explore some of the many other trails.

This was the very first experimental Cedarberg Hike for Scouts 15 years and over. It was the most talked about event of the year. It was to provide advanced Scouting and adventure for Senior Scouts in the Cedarberg Mountain Range near Citrusdal. Total cost was R6 all inclusive. Our Divisional Commissioner Colin Inglis was the main hike organizer assisted by Richard Goldschmidt.


All the Scouts who attended the hike, met at Rondebosch Station at 14h15 from where we went by private transport to the Cedarberg. My mother provided transport for Hans Reiman and myself, the only two from our Troop, to the Station. Squirrel (as he was called), took Hans, Allan (Scout 1st Claremont) and myself in his Ford Zepher to the Cedarberg. We went in convoy over Piekenierskloof Pass, through Picketberg, where we made a stop for refreshments, through Citrusdal and turned off onto a gravel road to Kriedouw. Everyone stopped at Kriedouw for a rest and later towards evening we made a huge fire and had super consisting of a braai. After supper we were divided up into three parties, namely the Northern, Central and Southern Party. Each party would hike a separate route, then come together in the end again. Hans and I were in the Southern Party. We left Kriedouw and went over Niewoudt Pass to Welbedacht where we spent the night. We lost our way at Algeria Forest Station, but eventually got to sleep very late under the stars somewhere in a Pine plantation.


The following morning after breakfast of fruit and cooldrink, we rested and waited for the Northern Party to arrive. Eventually we were all ready and the Southern Party under the guidance of Richard, Squirrel and Jimmy, made our way to Eikeboom, where we were to hike from. A short ride brought us to Eikeboom where we had an early lunch (to get rid of some more of our food). Lunch was sardines, rolls, cheese, cream crackers, instant banana pudding and cooldrink. One of the cars were taken to our end point at this time and the driver came back with another driver in another car. Then our food was divided into groups of four people sharing and cooking together. Each had about 3 kilograms of food to carry and my kit weight was about 11 kilogram with food.

After lunch we set off on foot, up the steep Cederhout Kloof to the Sneeuberg Hut. It was some climb up to the Hut, but we eventually made it ‘poot-uit’. We rested, then started supper of tomato soup, meat balls, rice, mixed vegetables, provitas with peanut butter and coffee. After supper we collected Slangbos to use as mattresses and sat watching the sun set. My mattress was about 60 centimetres thick and once again we slept in the open as the hut was too hot and crowded. 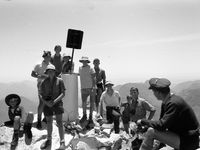 After breakfast of dried fruit, corn flakes, bacon, jam, biscuits and coffee, we left for Sneeuberg which we climbed. Our climb started at 10h00 up Sneeuberg which is 2027 metres high. To reach the top, we made a spiral ascent, and once there, signalled to the Northern Party on Tafelberg, using a mirror. The view was amazing, almost like standing on top of the world. We wrote our names on a piece of paper and put it in a bottle under the beacon, then returned back to the path again at 14h30 for lunch. 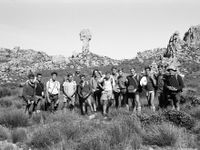 Lunch was quick, just viennas, cheese, ryvita and instant butternut pudding on the trail. After lunch we hiked on to the Maltese cross, where a climber had fallen to his death a month ago, trying to climb to the top of the cross. The huge rock cross formation was amazing and stood out like a landmark from far. Then it was on to a swimming hole where we swam, had supper of oxtail soup, corned meat, spaghetti and camped out in the open for the night. We had brought no tents on the hike, just a plastic groundsheet, so simply slept out in the open at night. The thought of any rain in this heat was a bit far-fetched.


We were up very early, as the sun came up, having a dried fruit and pronutro breakfast, then relax with biscuits and coffee. Richard chased us on as we had lots to do before the sun reached boiling point. We left in the cool daybreak for Disa Pool, where we arrived towards afternoon and swam in the ice-cold water. We dived and jumped from 6 metre down into the huge pool, seeing who could make the biggest splash bomb. After luncheon meat on biscuits, we tried our hand in damming up the waterfall which dropped 6 metre into the pool below, it was fun trying to hold all the water back with rocks and plastic. We then left for Kromriver where we swam in a dam, while the drivers went to fetch their cars and later we were off to Sanddrif, where all the parties came together again. Supper was supplied, as all our hike rations were now finished. We slept on the sand next to the river, amazed at all the stars you could see because of the absolute darkness.


After breakfast we made our way up the mountain to explore the Wolfberg Cracks. They were huge cracks in the top of a mountain, amazing to walk through, half wondering what would happen if they closed while you were inside them. On return we swam in the river, then everyone dressed into full uniform for speeches, photo’s, good-buys and at 3pm left for home. We were dropped off at our houses by Squirrel, I got home at 19h30. A fantastic hiking adventure from start to finish, we travelled 480 kilometres by car and did about 32 kilometres on foot. I will definitely be on the next one again!