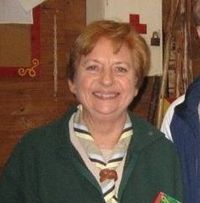 Akela for 1st Camps Bay/Sea Point Scout Group Anne's journey of service to Scouting began when she started with teaching Brownies and Guides. Then in 1972, Anne became a Pack Helper at 1st Camps Bay, and the rest, as they say, is history. The foundation of what Anne was going to achieve within the Scout Movement, had now been laid.

Camps Bay realized the potential leadership qualities that Anne possessed and, by the following year, she was given the reigns as Pack Scouter and accepted the challenge with a passion and determination, second to none.

With Anne at the helm, Camps bay were consistently, one of the top performing Packs in both the District and the Area. When the Pack "STAR" grading system was introduced, Camps Bay was the only Pack to achieve Gold Star status every year. The only problem facing Camps Bay now, was where to put the stars – space on the flag was fast running out.

Beneath that steel exterior there was a heart of gold, a heart filled with love, compassion and generosity. If you were in need, all you had to do was call and Anne would be there. When one of the local Packs was left leaderless, Anne took them under her wing, while, at the same time, tending to the needs of her own Pack and her family. Despite all Anne's efforts, this arrangement terminated and Anne took the final, courageous step of incorporating the Pack into Camps Bay and combined the colours and name, in order for neither Group to lose their identity.

Anne and her fellow Scouter's worked on many projects, camps, hikes, outings, activities, etc. all for the love of the children in their care and the passion they still feel for Scouting. During her time, Scouting underwent a number of changes; one was the acceptance of girls into the movement. While most Scouter's reacted with horror and scepticism at allowing girls into the "boy's club" Anne grabbed the bull by the horns and very soon, had a fair number of girls going through the ranks.

Journalism became another of Anne's passions, becoming editor of the Group magazine, the Glen Echo. During the magazines brief lifespan between the 70's & 80's, it garnered the H V Marsh Award for Scout Journalism, a record 3 times.

Anne earned the admiration and respect of her peers and garnered many service awards, including one of the highest awards available for a uniformed member of the movement, namely the ORDER of the SILVER PROTEA. The citation on this award read "for distinguished services to Scouting as Editor, Commissioner and Pack Scouter for many years"

It was indeed an honour and privilege to have had Anne on our Scouting team and we will continue to be inspired by her selfless dedication in the service of others.

Anne was a special and remarkable woman, who has enriched our lives and whom I am proud and honoured to have called, my friend. In our time honoured, Cubbing tradition, we say to you, Anne Hill, Good Hunting AKELA !

Condensed from a tribute by Greg Lyons