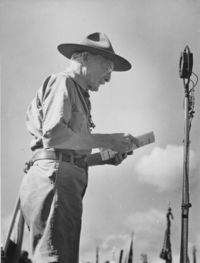 On the 19th October 1935 BP left London onboard the SS Mantola accompanied by Lady BP and their daughters Heather and Betty. The journey to South Africa was via Suez and the East coast of Africa with many visits along the way.

Upon arriving in Durban on the 28th December 1935 from East Africa, BP was suffering from Malaria and they decided to remain onboard the Incomati until it reached East London.

BP performed the official opening of the first SA Jamboree in East London on 9th January 1936 but due to ill health was unfortunately not able to attend many of the events.

On the 1st February with his health improved, BP and Heather left for Durban onboard the Durham Castle. On the 22nd February 1936 BP turned 79, and for their joint birthdays of the Chief Scout and Chief Guide, attended a combined Rally of Boy Scouts and Girl Guides at the Natal Gilwell Training Camp, Lexden in Maritzburg.

BP attended the South African Union Scout Council from the 25th to 27th February where it was decided that the best way to promote Scouting in SA was to form a federation of the European, Coloured, Indian and Black (Pathfinder) Scout movements. Each section would be separate, self governing and be registered under the control of the Union Scout Council. 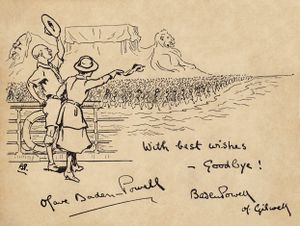 Lady BP who had been in the Cape attending Guide Rallies joined the family in mid March in Durban to start their tour of Southern Africa with their son Peter joining them en route. Places visited included game reserves, Johannesburg, Mafeking and the Drakensberg.

During April the family travelled to both Southern (Zimbabwe) and Northern (Zambia) Rhodesia visiting Scouts but also took a rest at the Victoria Falls.

On the 27th April they boarded the Llandovery Castle in Lourenco Marques (Maputo) for the return journey to England via the Cape.

Due to the ship running late, the only functions to be held were dinner with the Governor General at Government House and a Civic luncheon at the City Hall before departing on the afternoon of 5th May 1936.

This was BP's last official visit to South Africa.