The carrick bend is used to join very heavy rope or cable that is too large and stiff to be easily formed into other common bends. It will not jam even after carrying a significant load or being soaked with water.[1]

In heraldry, this known as the "Wake knot" or "Ormonde knot". 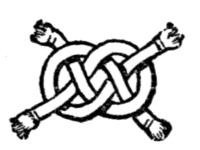 The Rover Network Badge is a Carrick bend

The eight crossings within the carrick bend allow for many similar-looking knots to be made. The lines in a "full" or "true" carrick bend alternate between over and under at every crossing.

If the two ends emerge from the knot:on the same side it is called the double coin knot. The form with the ends emerging diagonally opposed is considered more secure.

Unfortunately, with so many permutations, the carrick bend is prone to being tied incorrectly.

The carrick bend is generally tied in a flat interwoven form and will collapse into a different shape when tightened, a process known as capsizing. The capsized form is both secure and stable once tightened, although it is bulkier.

In the interest of making the carrick bend easier to untie, especially when tied in extremely large rope, the ends may be seized to prevent the knot from collapsing when load is applied. This practice also keeps the knot's profile flatter and can ease its passage over capstans or winches.