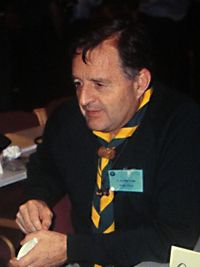 The Educationist
Reginald Dudley Forde was born in Johannesburg on 20 April 1940, but received his education in Natal. He attended Clifton School in Nottingham Road, and Michaelhouse. He holds four degrees from the Universities of Natal and Kwa Zulu Natal.. These include a B Comm, BA (Hons) a Master's in Philosophy of Leadership and a Doctorate. In 1964, he was the Student of the Year at the Durban Teachers' Training College.

He has proved himself to be an outstanding leader in the field of education. His Headmastership sees him through being a young, enthusiastic principal in Welkom to a maturing headmaster of Kingsway High School, and then the re¬nowned Maritzburg College, and Durban High School and later Rector of the prestigious Michaelhouse in the KZN midlands before retiring. He was also a lecturer at his alma mater, Natal University.

The Scouter
Throughout his entire career he inculcated strong values of leadership, discipline and commitment to young people. This was through the Boy Scout Movement of South Africa in which he became very active in the 1950's.

From 1959, he held various positions such as Area Commissioner: KwaZulu-Natal, National Commissioner for Training South Africa and Chief Scouts Commissioner South Africa (1995 – 1999). He is well known in most spheres concerned with leadership training and has published several papers on his studies and practical work in this area. He was inspired by the principles of leadership by adults and began similar courses to train leaders among the boys in the Boy Scout Movement. The immediate success of these early courses in training boys to become leaders was followed by regular successive courses, each building on gained experience, new innovative ideas and all-round improvement in standards recognising the need for scouting to keep abreast with new developments in a changing South Africa. These courses began with the training of the Patrol Leaders of his own group and laid the foundations of what was later to become the PLTU.

An ardent sports fanatic, a private pilot and yachtsman Dudley Forde has collected a number of awards in his long career. These include the Long Service Medal for 40 years of service to scouting; the Honourable Citizen Award for Service to Education; The Rotary Vocational Service Award; The Silver Protea and The Silver Springbok for exceptional service to scouting.

Civic Recognition
On the 27 April 2011 the President of South Africa awarded Dudley Forde as Counsellor of the Order of the Baobab (C.O.B) for his "outstanding leadership in the field of education and contribution to the community service through the channels of the education system and the Boy Scout Movement of South Africa".