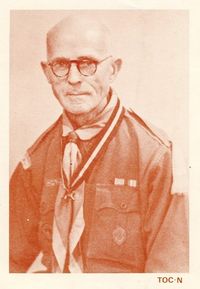 The 1st G.A.S.P (Green and Sea Point) Scout group came into being in February, 1909; and it is recorded that in 1910 one Edgar Tidman became the Assistant Scout Master. He was then a petty officer in the Royal Naval Volunteer Reserve and as part of his naval duties learned and enjoyed all forms of signalling. It was from this love of signalling that he took his scout name - "Toc" being the signalling term to describe the letter T and "N" being the last letter of his surname; so for the next sixty years he was known as "Toc N".

Toc N was born in England about 1880 and came to South Africa at the turn of the century. He brought his love of signalling to the 1st G.A.S.P. and for at least twenty years they produced the finest amateur signallers in South Africa, proficient in semaphore (two-flag signalling), morse (single flag), morse (buzzer), heliograph (mirrors over great distances) and Aldis lamp signalling.

He became Scout Master in 1914 and during the following years built the troop up to great heights - in 1917 the 1st G.A.S.P. had the distinction of having the greatest number of King's Scouts (equivalent to the Springbok Scout) in any troop anywhere in the whole world. There were forty of them in the 1st and for this achievement the troop was awarded the King's Flag, which was presented at a great concert and display in the City Hall on the 22nd June, 1917 by the Governor General, Viscount Buxton on behalf of His Majesty King George V. At that time there were more than 150 scouts in the troop.

By the middle 1930's, Toc N was a middle-aged man and the youngsters regarded him as the "Old Man". He was by then also known as "Chief" and was often called by this name. The Scouts learned to love this slender, quiet, well-spoken but fierce looking man with the bald head. He had thin legs and wore English type shorts down to his knees and socks up just under the knees; occasionally he would come out on a hike up Table Mountain or out to Hout Bay, or just round the mountain from Groote Schuur back to Sea Point. He loved to sit around a camp fire and tell his favourite stories of the ghost of the Sahara, Brigadier Gerard and Don Gaspard. He never varied these stories by one word; the young boys soon learned them off by heart but loved to hear him tell them.

He rarely missed a meeting and would just be quietly present to assist the Scout Master if need be; he had a great knowledge of scout lore and endless patience with some of us thick heads. He had the ability to motivate our troop teams in competitions we knew it made him happy if we did well, and so we did well.

Gradually he grew older - during the 2nd World War he was ill and after that physically less active. A few years after the war he retired to England, to be with his sisters in Sussex. How sad it was to take leave of him, knowing that he was going home to die. Little did we know that this astonishing character would fight his various illnesses for another thirty years before finally passing away to that Scout Camp on high aged 91. Many Scouts wrote to him while he was in retirement; he was always hungry for news of "his boys" in the 1st and replied with interesting comments and suggestions.

Many a 1st GASP Scout was proud and privileged to be able to say "I was one of his boys".