A History of the Gilray Scout Camp 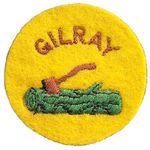 Gilray is named in honour of Carl Rayner (Scout name 'Serpent') and his wife Doris (Scout name 'Gilkela') by the combining of Gilkela and Rayner.

Carl Rayner was the Divisional Secretary at the time and was very supportive of the Coloured Scout Association and assisted in acquiring the lease from the Cape Town City Council around 1954.

Carl and Doris were the founder members and instructors of the South African Adult Training Team for many years. Initially the training took place in their backyard in Diep River or Gilcape as it was called - 'Gilwell in the Cape' and then later the Wood Badge training courses for Coloureds were held at Gilray.

Opening by the Cape Town Mayor

Gilray was officially opened by the Cape Town Mayor Mrs Joyce Newton-Thompson in 1958 (unfortunately the actual date is not known).

Over the years many volunteers and Groups have assisted in the ongoing development at Gilray.

To encourage this development the Ogle Trophy was introduced and is awarded annually at the Provincial Awards Ceremony to the Group assisting the most in maintaining Gilray over a year. 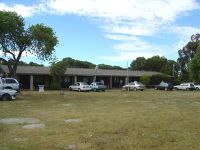 Major development of Gilray during the 1950's can be attributed to Alex 'Jakala' Philander – and it was said that Alex was Gilray!

The Gilray Hall (originally the offices at Wemmershoek of the firm that built the dam) was opened in 1958 and was named after the then Chief Scouts Commissioner of the Coloured Association, Charles Thebus, as the Charles Thebus Hall.

For Thirty Two years Mr Dennis Dooling was warden of Gilray and he and his family lived on the premises, playing a vital role in the administration and maintenance of the property. In 2006 Leon Meder and his family took over from the Dooling family in overseeing Gilray together with the Gilray Committee.

In November 2009 the Moss family moved into Gilray. Since then with much prayer and determination criminal activity is at an all-time low. Gilray has a resident church, two scout groups, and paintball using the site.

Throughout 2018 there was quite a lot of activity at Gilray with the Scouting in Schools programme making good use of the facilities. In June they ran their winter camps the with High School Troops and a Training camp for interns was held in July. September saw Patrol Leaders and APL Camps and a visit by the World Scout Bureau. In October Gilray hosted the annual Cub fun day.

Many people who pass through marvel at the peace and solace one finds on this property.