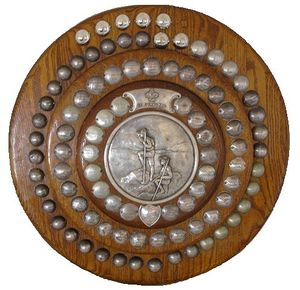 The Gordon Shield was presented to Scouting towards the end of 1914 by the Gordons Institute as "An Annual Competition against Cape Peninsula Scouts". Since then (the first competition being in 1915) it has been held every year apart from 1936 and 2020, through two World Wars, and today it is still the most popular Western Cape Competition on the Scouting calendar.

History of the Gordon Shield

The Gordon Shield as existing today was donated to the Boy Scouts Association in 1914 by Mr. W.G. Haines of the Gordons Institute as "An Annual Competition against Cape Peninsula Scouts."

Gordons Club with Mr. W. G. Haines in the centre

Mr. W. G. Haines was deeply interested in training boys who lacked the advantages of good family homes, and he started a boys' club named "The Gordons". He particularly stressed mental, moral, and physical training. He also offered his services as a gym instructor to the boys of the St. Michael's Home, an orphanage in Tamboerskloof.

Feeling that these boys missed contact with boys outside the home, he ran joint training sessions for the Gordons and the boys of St. Michael's.

Both the Gordons Club and St. Michael’s Home grew very rapidly. St. John's Hostel at the top of Kloof Street was established for the older boys, the juniors remaining at St. Michael's. The Gordons became the Gordons Institute and covered a wide field of activities.

The Scout Gordon Shield was first competed for on Saturday 19th September 1915 at the Rifle Range in Clee Road, Observatory. The Competition was for First Aid and open to teams of five each. 2nd Cape Town (Y.M.C.A.) were the first ever winners. The following year the Competition was held covering signaling and shooting. Since then it has been held every year except 1936 and 2020, through two World Wars, and today is still the most popular Western Cape Competition on the Scouting calendar.

In 1917, the Competition became a Patrol Camp, run on very similar lines of Gordon Shield Competitions as it is today, and there have been no fundamental changes to the actual competition to this day.

One main change, however, came in the early 1920's. A team who were absolute champions in signaling and signaling methods, lost all the 40 points for that test because of a misunderstanding, yet they still came second in the whole Competition by two points. It was then decided to give every test the same value – 5 points instead of one carrying 5 points and another 40. Thus there remained a fighting chance to win all through the various tests.

The tests, mainly on a Camp craft basis, covered the whole of the work for Tenderfoot, Trekker, Second Class, First Class and any proficiency badges held for the Competition. The unit of competition was a 'Standing Patrol', and except for certain exceptions the allocation of tests and duties were in the hands of the Patrol Leader. We are quite sure that the Gordon Shield is and was always a test of the Patrol System.

Teams have always been eight boys (in more recent years girls) from each Troop. At times, the Troop picked the best 8, even if they were all Patrol Leaders, but their ranks assumed for the Gordon Shield were one PL, one Second, and numbers 3, 4, 5, 6, 7 and 8. All members of the team then wore the same Patrol Colours, and the leader carried the Patrol Flag for those Colours.

The sites of the competitions varied, and some were even real strenuous hikes. In one competition, competitors met judges at the Grand Parade, Botanical Gardens, Kloof Nek, Woodhead Reservoir, Maclear's Beacon, Constantia Nek and Hout Bay. Standing camps have also been held at: The Glen (Camps Bay), The Homestead (Oranjezicht), Gilcape (Diep River), The New Gilcape (Eerste River), Pinelands, Parow and Ramsay Park (now in the middle of the Cape Town International Airport).

From time to time, particular Troops have won the competition for several years in succession, and then in many instances have gone down and never staged a come-back. Others have usually been among the first ten at most times. The competition has always proved a 'base of measurement' for Troops and Patrols against the implementation of their working Patrol System, with skill and Scout knowledge also playing a major role.

History of the Centre Plaque

Three of these Scouts rescued a man from drowning at Fish Hoek on the Sunday afternoon, and for this meritorious deed, they were each awarded the Medal of Merit., the first award of its kind in the country since the Scout Movement started in 1908.

But it is the story of the other three boys that remains fresh, because they were photographed while hiking home after a weekend spent at Kommetje, and the scene inspired a firm of London metalworkers to make a plaque of this picture.

To-day, similar plaques on competition Scout shields are scattered all over the world – but interest locally centres on the fact that this picture is on the Gordon Shield, and awarded each year to the winners of the local Blue Ribbon of Scouting. This year's competition, by the way, is taking place to-day and to-morrow.

Another interesting association with this picture is that it was taken by Arthur Elliott, whose collection of historic negatives were kept for the nation and now form part of the Archives.

Scoutmaster "Bill" Baker was a special friend of Arthur Elliott, and both were interested in photography. Arthur Elliott had a way with children, and several of his famous camera studies involved children. It was natural, therefore, that in a time when the Scout Movement was still young, he should see in three boys an ideal subject for his art.

On the Saturday Mr Baker's son, Joe, with two of his fellow Scouts, Bill Seaton and John Jordan, set out for a week-end hike and camp at Kommetje.

Returning home along the Kommetje road, half-way to Fish Hoek, these boys were hailed by a man carrying a camera, case and tripod. Joe Baker recognized the man as Arthur Elliott, and after taking an individual photograph of each boy, he then took one of the group. These pictures of Scouts on a hike were in all ways authentic, as they had but paused a moment from their active Scouting to oblige a photographer.

They were wearing blue jerseys and shorts with the Scout hat, and they carried a staff. On Joe's pole was flying his flag of rank as a patrol leader.

The pose was a favourite one of Baden-Powell's and Joe Baker must have seen in the Scout magazines.

When prints had been made, Arthur Elliott took them along to his fellow photographer, and asked him whether he liked them. "Bill" Baker had the Scout knowledge, and was asked whether the pictures were a true reflection of Scout boyhood. The result was that Arthur Elliott gave Mr. Baker the negative of the three boys, and a print was sent to the "Scout Magazine" in London, where it was reproduced.

The story of how it came back to South Africa might seem to strain credulity, but it is true and vouched for by Mr. Baker, who is still connected with Scouting.

Evidently the picture reproduced in the "Scout Magazine" attracted the attention of a firm of metal workers, who, at the time, were making trophies for the Boy Scouts. They obtained the print and soon afterwards Joe Baker of the Second Claremont Group appeared in bronze on a Scout trophy.

On day Mr. "Bill" Baker and another Scout leader were talking to the later M. Haines, who was interested in youth work and started the Gordon's Institute. "You're interested in boys," said Mr. Baker's colleague. "Why don't you do something for the Scouts?"

Mr. Haines promptly accepted the challenge. "I will," he replied. "I will give you a trophy."

So an order for a Scout trophy was sent to the London Scout Headquarters and passed on to the regular makers of these things. Thus it happened that Joe Baker, in bronze, came back to South Africa on the Gordon's Shield.

There are other posed pictures and statuettes of a similar type, and I know that the Withinshaw Trophy, for instance, was that of a pose by a Cornish boy. But, although the order merely stated, "a Scout shield," and the makers were given a free hand, the one dispatched turned out to be the one inspired by Arthur Elliott's photo on the Kommetje Road.

The photograph taken in 1909 became a shield for competition in Cape Town in 1915, and when the trophy was first presented Joe Baker received a special invitation to attend and hear the story of his hike over again, as by that time he was over the age for competitive work as a Boy Scout.

Mr. Baker is still in our midst, as young in spirit as he looks on the Gordon's Shield, which is being competed for again this weekend. [1]