The HV Marsh Award for Scout Journalism is a national award for the best Scout Group magazine, digital newsletter or website. The award is announced annually.

The history of the HV Marsh Award

HV Marsh was a well-to-do building merchant in Pietermaritzburg and was a much respected Scouter. He was the first South African to go to Gilwell in London to take a Wood Badge course (at his own expense), and to return to impart his knowledge to Scouters in South Africa. HV Marsh was the owner of Lexden (named after a little village near Colchester, Essex, where he was born) which he later donated to the Scout movement for training purposes. 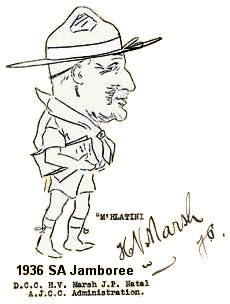 The award was created by Vic Clapham who was a professional PR man as well as being an Assistant Rover Scout Leader. In the early sixties Vic produced VELD LORE, initiated the Scout Press Club and in order to motivate Editors and to encourage communication, he decided to create a national competition for magazine editors.

Vic had a tremendous-respect for HV Marsh as a communications expert, and, as always, not wanting to push his own name to the fore, decided to name the award "The HV Marsh Award for Scout Journalism".

The trophy is made from a Kudu horn. Read how BP came to own a Kudu horn and how it became part of early Scouting tradition.