The Hawkeye Trophy is the main annual Rover Competition in the Western Cape.

Each year the format of the competition changes and it can be anything from hikes between activity bases, car rallies, service projects, basic Scouting skills tests, quiz nights, scavenger hunts, cook-offs, or more. Traditionally, the winners of the Hawkeye Trophy are responsible for organising the next year's competition.

The History of Hawkeye Trophy

Rovers were established in 1918 in England and in 1919 one of the first Rover Crews in England, held a work party on the newly acquired Gilwell Park development, staying overnight in pouring rain in the 'Pigsty' shed as they called it, and which still bears that name today.

In the same year 1919, the idea of Rover Scouting was discussed in South African, but being under the control of Imperial Headquarter in London, Crews only really started up when the final rules to Rovering reached this country, and then only on the decision of the individual Scoutmasters. 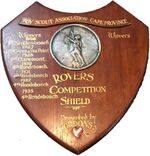 Rovers in South Africa got off to a rather slow start and it was only in 1927 that the official constitution for Rover Scouts was published, and a Rover register and Rover Membership Cards were initiated.

The 1930 records reveal that these were the golden years of Rovering with a membership of two hundred in the Western Cape and that the Rovers competed for an annual Rover Efficiency Shield. During the war years it was reported that 81 Rovers were on Active Service and that no further Rover Shield Competitions took place. The original Trophy somehow disappeared without trace during this time and Rover Competitions never quite took off again.

However, 91 years later in 2021 Sarah, who is a Stellenbosch Scout, discovered the old Rover Trophy and with the help of the Heritage Team the mystery was solved. 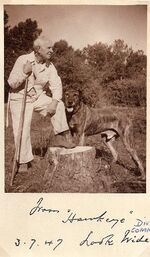 It was only years later in 1948 that the Rover Crews once again gathered in Green Point to compete for a new trophy introduced, being won by 3rd Green and Sea Point or 3rd GASP in the end.

This new competition and Trophy derived its name from the then Divisional Commissioner Dr Frederick H Dommisse or 'Hawkeye' as he was called in Scouting.

Thus the Rover Hawkeye Competition has since become the main Rover Competition for Western Cape Rover Crews each year. The format of the competition has come a long way since it's inception in 1948 and changes from year to year, according to the ideas of the organisers (these are normally the current winners of the previous year).

These formats can be anything from base hikes, car rallies, service projects, basic Scouting, a quiz, a cook-out at a set venue or a whole combination of events.

On a rather sad note is that prior to the 1963 Hawkeye competition, burglars totally destroyed the original trophy, but a replica was ready for the 1963 competition and is still being used today.