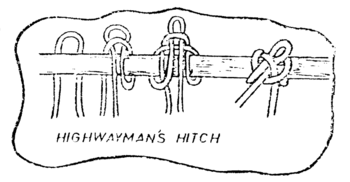 The Highwayman’s hitch is a quick-release hitch used to temporarily tie a load that will need to be released easily.

The hitch is untied by pulling the working end, even when under tension.

The knot is three bights that each successively lock the previous one:

The locking actions are achieved by reaching through each bight to pull the next one through.

The knot has to be finished by pulling the standing part tight to ensure that it holds.