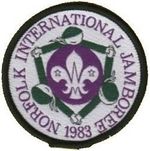 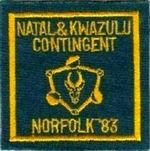 On Thursday 23rd. June, 1983, 18 Scouts and 4 Scouters (Contingent Leader Doug Drysdale, Ed) left Durban for Johannesburg on the tour of a lifetime. After staying overnight in Alberton we visited the Crown Mines Mining Museum on Friday morning, and at 17h30 we took off with Luxavia, bound for Luxembourg. After diverting from Luxembourg due to fog we landed at Brussels after a 14-hour flight.

After 2 days in Paris we were off on a "whistle-stop" tour of Italy. We spent a day in Florence, 2 days in Rome, and a day in beautiful Venice. All long-distance travelling was done by night train and, although it was a bit tiring, it was certainly the most economical and efficient way to travel between cities. It also afforded the opportunity to meet the local people.

From Italy it was on to the Kandersteg International Scout Centre in Switzerland for 6 days. Here we participated in various hikes and met Scouts from all over Europe. We also visited Lucerne and Mt. Pilatus from here. We then pressed on to Amsterdam, part of the journey being by Rhine steamer - very relaxing! In Amsterdam we stayed 3 nights in a "pensioned-off" boat in the harbour.

Our stay here included a day-long bicycle hike along the dike to Marken.

The cycle tour in Holland

An exciting experience - especially for two members of the Contingent who were not too well acquainted with this new-fangled contraption called a bicycle.

We left the hustle and bustle of Amsterdam for the much quieter life of the country of Luxembourg, the "Green Heart of Europe". For the duration of our 5-day stay here we were very ably hosted by a Luxembourgian Troop. Our activities included an overnight hike in the beautiful countryside, visiting various castles. Thousands of Scouts from all over Europe use Luxembourg as a camping ground each summer, and we met many of these Troops in transit all over Europe.

From Luxembourg we travelled by train, coach and hovercraft to B-P House in London. During our 4-day stay ay here we visited the Royal Tournament on the same evening as the Queen, as well as many of the usual tourist attractions. We also spent a most interesting day at Gilwell.

From London we travelled by coach to the Norfolk Jamboree in Norwich. This was a county Jamboree and for Norfolk this was their first county Jamboree in 15 years. There were 2 300 Scouts from 17 countries attending, including contingents from Turkey, Austria, Finland, Sweden, France and Belgium.

For the first two days the weather was dreadful with the opening ceremony conducted in a steady drizzle. The atrocious July weather somehow brought the nations together and right from the start there was evidence of the unique mix for which Jamborees are renowned.

Just how Scouts of all nationalities managed to communicate is absolutely amazing and within minutes of setting up camp, we had the opportunity of meeting Scouts from all over Europe to swop ideas, badges, addresses, etc., and to form new friendships.

The badge swapping particularly seems to be an obsession and very early on in the week, there were little groups all over the site with enormous collections to exchange. Our contingent from Natal and Kwa Zulu was particularly enthusiastic in this field. Indeed, we carted around bulging rucsacs which contained the most astonishing treasure trove of goodies. There were few, if any, disappointed customers in this field.

The weather then became hot and sunny, as it had been throughout our tour; perfect camping weather and the range of activities put on was most impressive. There was parascending, go-karting and archery. Off site, sailing and canoeing. There were trips to the North Norfolk Railway, the Broads, Norwich and Sandringham. People came in to demonstrate their talents - from craft workers to a hot air balloonist and the police dog demonstration team.

The list was seemingly endless, with clay pigeon and small bore shooting, an assault course and a tremendous variety of both indoor and outdoor entertainment on offer and some people simply couldn't find the time to fit it all in.

Certainly one of the highspots for many people was the tremendous rivalry which very quickly built up between the eight sub-camps on site. This was greatly encouraged by the camp newspaper 'The Norfolk Pillar' and the Jamboree radio station 'Friendship Radio'. As the week wore on, the challenges progressed from the more staid football and rounders to ones like 'How many people can we get into a sleeping bag' or 'I bet we can make a more disgusting sandwich than you can'.

Everywhere you looked around the site, there was evidence of Scouts getting together and having fun. The Austrians particularly would start singing and dancing at all times of the day or night and very soon would be joined by British, German, South African and American, indeed a variety of voices.

Some members of our contingent even had the distinction of starring a number of times on both local and national TV, dressed in traditional Zulu costume.

All too soon we had to pack up and return, via Luxembourg, to South Africa. The experience can be described as truly memorable, because of the comradeship with one's fellows, the brotherliness between Scouts, and the friendliness of strangers.