Jack Allies joined the South African Coloured Boy Scouts as Signaller Instructor. He subsequently took the oath and was promoted to Headquarters Administrative Staff with the rank of District Scout Master.

In 1955 he was awarded the 'Silver Wolf' which is the highest award made by the (International) Scout Association "for services of the most exceptional character."

Unfortunately, many of the records of the Coloured Scout movement were lost in a fire, but the following article gives an interesting picture of his life. 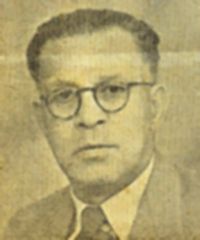 In Egypt Mr. Allies with ex-Sergeant Rev E L B George, were the first two Cape Corps representatives to pass a course at the Zeitoun School of Instruction at Heliopolis, Cairo. He served throughout the campaign and was mentioned in despatches.

When the 1st Cape Corps returned to the Union after Armistice, Mr. Allies performed ship's wireless work in the absence of the Wireless Operator who was seriously ill aboard, for which work he was handsomely paid by the Naval authorities.

Subsequently Mr. Allies became Secretary of the 'Comrades or the Great War' Association (C.C. Section) with an office at 23 Burg Street, and was responsible for meeting the needs of many an ex-volunteer, including a large number of Namaqualanders who were reluctant to return to their homes owing to the severe famine which existed at the time.

He assisted Captain I. D. Difford in writing the history of the 1st Battalion Cape Corps and contributed largely to Chapter 20 (The Sports Chapter), and many photographs appearing in the book were taken by him.

He became Secretary of the 1st Cape Corps Association, and was instrumental in organising the Memorial Service held in the City Hall in 1929.

He was appointed first National President of the South African Coloured ex-Serviceman's Legion of the B.E.S.L at its inaugural meeting held in Cape Town in 1945, a position to which he was unanimously re-elected in 1947.

For the past two years he has been serving on the Cape Town Discharged Soldiers Demobilisation Committee (C.C. Section).

As National President of the ex- servicemen's Legion, and a number of the D.S.D.C., he has led deputations to Gen. Palmer, Commissioner of Police, and General Brink, Director General of Demobilisation, and had interviews with various other heads of departments in the interest or ex-volunteers.

He served as Secretary of the Athlone and Crawford Civic and Ratepayers Association for three years, after which he was elected Life Vice-President.

He was Secretary of the Athlone and District Sports Board of Control for ten years before resigning.

Well known in the Cape Flats for Social Work among the poor he, with Mrs. Allies (then Miss Kate van Harte) who was Secretary of the Athlone and District Soup Kitchens Committee, to which funds the City Council contributed £50 per annum, were mainly responsible for the establishment of seven soup kitchens in the Cape Flats.

Mr. Allies was a great sportsman, and at various times, played representative Association Football, Cricket and Tennis. Starting at the age of seventeen he played 1st Class Soccer and Cricket for the original Sea Point Club. He captained the 1st Batt. Cape Corps team in Egypt against leading English and Scottish Soccer players.

Mr. Allies is indeed a unique man, one could honestly say he was a man of many talents with an outstanding personality.