Mafeking and the origin of Scouting

In 1899, the town of Mafeking became world famous as the site of a siege which lasted seven months. During the siege, a small group of boys formed a cadet corps which was one of the inspirations which led Robert Baden-Powell to found the Scout Movement. See also: Baden-Powell at Mafeking.

The land in what is now the Northwest Province of South Africa was inhabited for thousands of years by the Khoisan people. The Khoisan lived closely in tune with nature, in nomadic groups of hunter-gatherers. Stone engravings up to several thousand years old are often found on the rocky outcrops in this region.

More recently the area was settled by the Tswana, of whom some tribes (the baKwena and baGatla) are known for their stone constructions and erection of large town.

The town of Mafeking was founded in the 1880s by British mercenaries who were granted land by warring Barolong chiefs in return for war service.

The town itself was laid out near their collection of farms by British Commander Sir Charles Warren and became the administrative centre of the region and the headquarters of the peace-keeping Bechuanaland Border Police.

Before 1899, Mafeking had been used as the base for the Jameson Raid - an unsuccessful raid by the British colonists against the Dutch speaking Boer republic of Transvaal. Although the raid failed, it added to the build-up towards the Anglo-Boer War in 1899.

Naming of the town

The town's name was first spelt by British settlers as Mafeking, but the name reverted to Mafikeng in 1980 following its incorporation into Bophuthatswana. In February 2010, Lulu Xingwana, the Minister of Arts and Culture, approved the town's name to be changed again to Mahikeng. Despite this the town's ANC-run local government and most local residents still refer to the town as Mafikeng both informally and formally.

Mafeking comes from a seTswana word meaning "place of stones". In seTswana, fika means stone, mafika is the plural, and the -eng ending means "place of". (Similarly, the province of Gauteng in South Africa is the "place of gold").

The British colonists spelt the name "Mafeking", which is the name that most Scouts know, but today the town is spelt "Mahikeng".

Baden Powell and the Siege of Mafeking 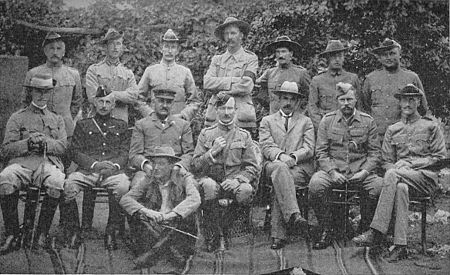 Robert Baden-Powell and staff at Mafeking

The Siege of Mafeking during the Anglo-Boer War in 1899 made the town world-famous. Mafeking was a small town divided into an African town of about 7500 and a 'white' settlement of about 1350. It was an important railway siding on the line from the Cape to Rhodesia.

As the war drew closer, Colonel Baden-Powell was commissioned to raise a force in Rhodesia to defend the border on the north of the Transvaal republic. He chose Mafeking as a supply base on the 800km frontier, and made moves to defend these supplies against the Boers. In addition to defending the frontier, he was also told to keep the enemy forces occupied and away from the main British forces to the south.

During the siege Baden-Powell first used boys as "Scouts", taking messages and assisting in duties around the town. The town's relief after 217 days made him a hero in Britain, and his fame and popularity enabled him to start the Scout Movement a few years later. However until the declaration of war, Baden-Powell was prevented from making public preparations for war, for fear of offending the Boers and the Dutch living in the Cape colony. So his force could not recruit openly, or even arm itself adequately to defend the town.

He could not call for volunteers, for instance, or arm the civilians, distribute ammunition or inquire into the supplies of the police openly - but he did these things nevertheless, secretly, with the connivance of Mafeking's British Mayor and Resident Commissioner. He could not fortify Canon Kopje, a height overlooking the town, but did it anyway under the pretence of building a rifle range. He could not requisition sandbags for fortifications, but collected all empty grain sacks usable for the purpose. He could not ask to have a couple of armoured trains sent up from Cape Town, but had two constructed clandestinely in the railway yard at Mafeking by walling up long 'bogie trucks' with steel rails.

He did not even have decent armament for the defence: and the two guns he was sent from the Cape turned out to be obsolete 7-pounders. One was called 'Crooked-tail Sal'. Against this the Boers would bring the 94 pound siege gun known as Grietje, or 'Old Creechy' to the English townsfolk.

Baden-Powell's regiment consisted of 700 soldiers, to which he added 300 volunteers from the white men of Mafeking. He also armed 750 Africans, although orders were that they could only defend their own land and not take part in the main defence. With this force he would have to defend a frontier around the town of 10km, against a Boer force of more than 6000. War was declared on 11 October 1899, and by 13 October the town was surrounded by the Boer forces, cut off by rail and telegraph from the outside world. Baden-Powell would have to improvise.

In South Africa under Apartheid, Mafeking became part of Mmabatho (mother of the people), the capital of the supposedly independent "homeland" of Bophuthatswana. In 1994, when Bophuthatswana was reincorporated into South Africa, the name Mmabatho was replaced by the historical name of Mafikeng and later Mahikeng.

Today Mahikeng is the capital city of the Northwest Province in South Africa.