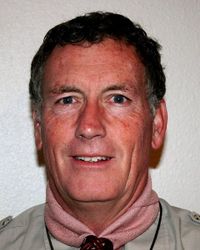 Paddy joined the Scout Movement in 1961 as a Cub with the 2nd Green and Sea Point Pack which held its meetings in the Congregational Church Hall, Sea Point. Moving up to Scouts he joined the 12th GASP Scout Troop and later became their Assistant Troop Scouter. Paddy then went on to form and run the 12th GASP Rover Crew and was appointed Deputy Assistant Area Commissioner for Rovers.

Having completed the Prelim Wood Badge, Cub Camping and Wood Badge courses he was appointed ADC Training for the Atlantic suburbs. Training was now one of his many strengths and with a strong people development focus, he went on Leader Training courses and the Advanced Trainers Course later being appointed Honorary Commissioner and Leader Trainer and is currently a member of Adult Leader Training Team.

Paddy has an active interest in the outdoors and especially hiking and camping. His leadership skills were put to good use as a committee member of Scout Mountain Club and were further enhanced upon completing the Mountain Leadership Course. Since 1978 the Senior Scout Adventure has benefited greatly from his running Mountaineering, Handcraft and Water Activities bases at various Adventures.

Like many Scouters, Paddy has been a stalwart in areas too many to mention, being active in many Western Cape Regional events, competitions, Group Chair and Committee member 1st Bergvliet Sea Scouts and was a Trustee of Scout Foundation till his appointment as Regional Commissioner.

Recognition of his passion for Scouting and his commitment to the Movement has been acknowledged having received the Chief Scouts Commendation, the Certificate of Merit, the Medal of Merit and Long Service Medal.