Route: Elgin and the Bot River area on Bicycles 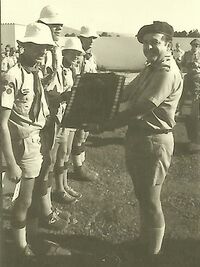 The theme of this year's Rayner was most imaginative - each team was a group of four hussars detached from the Light Brigade with orders to capture General Ryjoff, the Russian Leader in the Crimean War. The references to the analogy between the cavalrymen mounted on horses and the Scouts mounted on bicycles were many and apt. For example, on arrival at the campsite next to the 'Black Sea' (a dam on the farm 'Geelbeksvallei') the teams were told: 'Tie your horses in the area allocated. You are not to visit your horses until the. morning; Colonel Yorke will see to their needs'.

Errol Kotze organised a novel and challenging competition. With the kind permission of a number of landowners and of the Regional Director of Forestry, the teams cycled 25km (mostly on gravel) over the old mountain pass south of Houwhoek, from a point south of Grabouw through to Bot River - a beautiful section of countryside, some of it included in the Highlands Forest Reserve.

Along the way, the teams tackled a wide variety of tasks designed to test their general resourcefulness and their preparedness. The tasks were well selected to fit in with the theme of the weekend and included the following:-

All tasks were marked by judges who gave special attention to assessing leadership. At the overnight camp the teams inter alia cooked Turkish 'dolmas' (meat, rice and savouries in vine leaves), and Russian 'blintzes' (a form of savoury pancake). Judges received names of commanders on the British side- guess who was Lord Lucan! S.T.A. 's included message, a parabolic solar cooker, snares and a sketch of the food chain.

Comment from the teams was entirely favourable to the format and organisation of the competition. As one hussar said after the Charge of the Light Brigade: . 'Never mind, My Lord, we are ready to go again!'