Route: Grabouw and the Steenbras Kloof 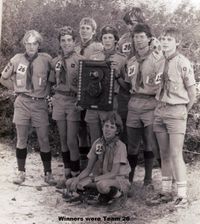 Errol Kotze seems to like playing the roles of British Generals. Last year the Rayner theme involved hussars and the Crimean War; this year each team was a party of four paratroopers in a World War Two setting. Specifically, the teams had "landed" in the operational area near the Neder Rijn. They "scouted" on the Saturday in the landing zone, "eliminating enemy resistance". (1st Green and Sea Point's three German-speaking members must have enjoyed the irony of the reference to "enemy"!) On the Sunday they "fought" their way towards the bridge at Arnhem to rendezvous with the rest of the division at the "victory parade". Along the route they encountered "high ranking officers of the Division (who required them) to perform certain tasks that are essential to the main objective.

A neat theme, to which Errol very cleverly wedded the tests confronting the teams. The terrain fitted the theme. With permission from private landowners, State Forestry and the City Council, the competition started at a point on the N2 shortly before the Grabouw turnoff. Teams hiked via tests to a campsite on the Oudebrug farm. After supper, a series of bases around the perimeter of the farm's large dam were visited. Teams got to bed well after midnight, but their slumber was interrupted by a 3 am call to beat out a fire in a nearby forest. (Thanks to Greg Wright and David Faure of 2nd Somerset West, who saw the fire from their campsite and went to investigate, serious damage was prevented.)

Teams moved out before 6 am and crossed into the Steenbras catchment above the new upper dam, tackling tests on the way. The hike along the southern shore of the Steenbras Dam was enjoyed (well I enjoyed it) in bright sunshine. Across the spillway, over the koppie, then a steep descent to a lunch spot next to a pool well below the dam. (By this time several teams had lost interest in tests and were concentrating on survival!) Then downriver to the Steenbras River mouth, where the Benning Bridge, standing in for the bridge at Arnhem, was reached around 6 pm after 20 km of hiking with full packs.

The twenty-seven four-man teams which took part included entries from Paarl and Stellenbosch.

The tasks, mostly fitting with the paratrooper theme, included-  tackling a commando course  building a raft  rescuing a wounded paratrooper from a tree  rectifying a mechanical fault in an engine  making and using a grappling iron  using ground to air signals  making bombs (with real ingredients!)  reading a morse message ("What is that funny flashing?" a Scout was heard to ask.)  making and using a charcoal cooker (the best were very successful).

Among other tests, there was a difficult "current affairs" quiz. (Do you know the name of the Spanish Prime Minister who recently resigned? Or what tragedy hit the town of Laviano in 1980?)

All tasks were marked by judges who gave special attention to assessing leadership skills. Congratulations to the 1st Pinelands winners, and to the team that came close to upsetting them.

The tough hike made the endpoint "a bridge too far" for some. But the 1981 event will be remembered as a challenging and stimulating competition in the best-Rayner tradition.