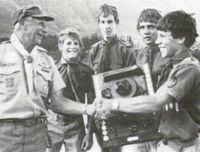 The 1982 competition was well up to standard, reported the Chief Judge, civil engineer Kevin Wall. Thirty four-man teams (age group 14 to 17) climbed from du Toit's Kloof Pass up a very steep mountainside in the dark, along the way being tested in skills such as rescue from drowning, powers of deduction, and first aid. Arriving at the campsite, in the vicinity of the Krom River, they cooked substantial meals (also for competition purposes), getting to bed in the small hours.

Early the second day they hiked through attractive territory, disposing of tasks such as rope-climbing, diving, observation and flagpole-building. The further route took them to the top of Krom River Dome, and back down to the Pass. At the foot of the mountain various fitness tests awaited them.

The teams had in 27 hours climbed more than 1000 metres, and descended the same amount, all through rugged territory and with heavy rucksacks. The eighteen Scout leaders who had acted as judges and had in that time thoroughly checked their knowledge of the Scouting skills, were most impressed with their performance.

The team from the Second Rondebosch Troop was the worthy winner. Next place went to 1st Somerset West and third place to 1st Monte Vista.