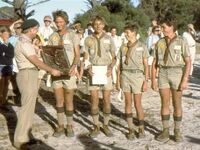 It is the year 1795. A British fleet has arrived in Simon's Bay and has demanded that the Cape be handed over. Governor Sluysken is determined to resist. The force landed at Muizenberg wins the first battle, but is not strong enough to defeat the Dutch forces in a sustained campaign. For the next month skirmishes take place in the area around Zandvlei and what has since become known as Retreat. The commander of the Dutch troops, Colonel Gordon, is anxious about the garrison he left behind on the hills above Simon's Town. He therefore sends a four-man detachment, specially selected for their skill, fitness and initiative, to find out what has happened to the garrison. Because of the British troops on the plains below, he orders that this detachment take a route over the mountains (the wild, unknown territory beyond Tokai).

The Rayner Trophy has the reputation of being the toughest Scout competition in the world. It was the prospect of a long hike and series of difficult tests that awaited the twenty two teams on Saturday February the 14th as they met at Mowbray Station with, not yet revealed to them, the plan that they follow the footsteps of this four-man detachment so many years before. (One of the teams was that from 8th Pretoria (St Alban's), which had come to Cape Town specially to take part in the competition).

Drivers took the teams from Mowbray Station to the Rustenburg Junior School for Girls, where they were met by John Mutti. This venue was chosen because in Rustenburg House, a historic building now used as the school office, were signed the articles of capitulation forced upon the Dutch when, two months after the Battle of Muizenberg, British reinforcements arrived.

The drivers then took teams through to Tokai Forest Station.

The first part of the route took teams uphill, via several tests, to the Elephant's Eye cave. This cave, at one time the stronghold of a Hottentot chieftainess, was the setting for Kim's games on Hottentot artefacts and V 0 C coin replicas.

From there they hiked to the shores of Zilwermynmeer (known in other times as Silvermine Reservoir). A daunting set of deadlines loomed for tests such as the following -  cooking potjiekos  making coffee, with beans supplied  demonstrating lighting a fire by flint and steel  making a compass  cooking an egg on a skewer and an egg in a potato  making a smoker and smoking fish  diving for lost VOC crockery  crossing a commando bridge with obstacles and working from outside a quarantine area, transferring a bundle of washing (that "in which smallpox had arrived at the Cape") into a fireplace where it could be incinerated.

After a too-short sleep, teams set out early on. Sunday morning. After catapult shooting at wooden parrots, they had, at various points of the trail to compose and recite an ode, identify snakes, pinpoint position and, at the old Zilwermyn shaft itself, report on the geology encountered. At the historic Groot Zilwermyn farm, somewhat frisky horses had to be ridden through an obstacle course (some teams found this a daunting experience).

Teams were transported to the heights above Glencairn. There hiking resumed through most attractive fynbos and protea country. At various points on the trail the teams expressed their anxiety at the fate of their compatriots at the garrison and attempted to contact them by means such as heliograph signalling and the flying of kites. At Kleinplaas Dam, sand story had to be interpreted and a team member was carried across the water in a canoe. After a bash through the bush which only some patrols attempted (times were running short for others and they did not attempt some of the later bases), teams found their way to Ysselsteinmeer (otherwise known as Lewis Gay Dam) and used their lilos to cross the water, climbing the wall of this concrete arch dam by rope ladders. At the treatment plant, deadman's crawl and various written tests awaited them. At the old General Botha training camp above Redhill, parents and Scouters awaited teams. Yet another Rayner had reached its conclusion.