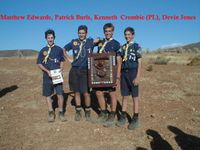 The Venue/Route
The Rayner Trophy was held in the mountains above Villiersdorp in the western most section of the Riviersonderend mountains. The hike started out on Boskloof which is an apple farm above Theewaterskloof Dam. The route then took the competition over Silver Stream, Ratelfontein and finished up on the farm Kleinfontein some 10km north of Villiersdorp. This was an entirely new area to the Rayner, totally unknown to the Scouts and was all on privately owned land. Landowners are in general, usually happy for people to cross their land as long as they are asked obviously, and understand the full implications of the competition. This includes the number of Scouts, Scouters, number of vehicles if any and precautions to be taken to avoid fire. The latter being, of particular concern given that February/March is the height of the fire season in the Cape fynbos. Environmental Awareness
The route took the competition through the centre point of the Cape Floral Kingdom which thus meant that this is where the species richness is the highest in all our fynbos. This fact did not escape the orqanisers and a section of the competition called Environmental Awareness was created. This worked well, although some Patrols may have been surprised at its inclusion in the competition. Vegetation plot, Flora Report, Bird List, Protea Identification and the Outdoor Code were all activities which contributed towards the Environmental Award. The night base, Footprint Recognition, was not included in the Environmental Awareness tally although it could be argued that it should have been. This is documented under "Competition Results" in the Rayner Trophy 2003 file fully. However, a summary of the top ten positions is shown below for the Rayner Trophy and Environmental Awareness.

Acknowledgements
The judges of course are essential in the running of the Rayner, most of whom should be asked to help out again at future Rayner's. I am therefore very thankful to these people. The judges are documented in the Rayner Trophy 2003 file under the "Judges Instructions" tab. I am indebted to Dr Tony Rebelo of the National Botanical Institute at Kirstenbosch and who is the scientific officer for the protea Atlas Project, who walked with me to recce the route. In addition, the Protea Atlas Project also, provided colour maps and made five copies of a field guide for proteas, SASOL Proteas, available to the competition and to the top 5 Patrols in the Environmental Awareness section of the competition. In addition, the help on fairness of tests, the distribution of marks and timing that I received from Richard Goldschmidt was invaluable in ensuring a better run competition.