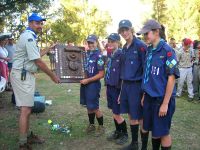 The theme for the Rayner Trophy was "Brownsea Island", and in keeping with the centenary of Scouting. The competition was held in the Olifants River valley, near Beaverlac.

The first day entailed hiking down a river with a series of spectacular pools. Many of the activities revolved around water and included retrieving numbered golf balls from a pool and stating the Scout Law for the number, water rescue, floatation using a Tshirt, identifying knots under water and then tying them, and a race across a stunning pool where Scouts had to transport all the kit needed to make a cup of tea, make it and then swim back with hot tea.

The night bases comprised a First Aid stunt, retrieving peanuts to assist the endangered Red Squirrels on Brownsea Island, an underwater Kims game, measuring the height of B-P's flagpole, communicating on the island using tins and string and an electric fence which was used to keep peacocks out of B-P's campsite during the mating season (poetic licence has been used here).

The second day started with a re-enactment of B-P's breakfast at Brownsea Island which was milk and biscuits. The competition then strolled up a gentle slope were a "proper" breakfast was cooked and a kudu horn was drawn as an STA. B-P blew such a horn everyday, to wake up his camp at 6.00am. Some of the Scouts succeeded in blasting a real horn at this base. After an abseiling base, came a scratchy descent into the Olifants river and the rest of the competition was a kloofing trip. Many Scouts found out that their packs were not water-proof which made life quite difficult with heavy water logged packs.

Congratulations to 1st Hermanus for winning the Rayner for the first time, 2nd Somerset West as runners up and 2nd Bergvliet A for coming 3rd. 1st Hermanus also won the Environmental Awareness prize which was kindly sponsored by the South African National Biodiversity Institute (SANBI). The Rayner is a tough overnight competition for Scouts and is not for sissies. This tradition was upheld and I appeal to Scouts who learnt what is required and expected on this competition, to come back next year wiser, stronger, more knowledgeable in Scouting skills and conquer the adventure of the Rayner again, in fine style. It is an achievement mentally and physically. Congratulations to all the teams who hiked the Rayner 2007.

Many. thanks go to the judges who gave up their valuable time and who were all most co-operative. Thanks too, to Nimmy Abrahams and Shantel Kent for their assistance in logistics and catering. The final thank-you goes to Tony Rebelo who recced the route with me, came up with great ideas and assisted me in the organisation and running of the competition.