The Rayner Trophy this year consisted of a gruelling hike in which most teams were unable to complete. 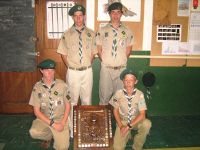 The competition required teams to meet at Hout Bay beach where they were given instructions to drive to the Suikerbossie restaurant. We then hiked along the side of the mountain and then finally making our ascent up Llandudno ravine. Teams then hiked along the twelve apostles and stopped for supper at the Scout hut. After supper was completed teams hiked down Kasteelspoort and along the contour path above Camps Bay. From Kloof Nek a climb to just below the top of Lions Head and from there down to Appleton Camp, which is just below on Signal Hill, where teams camped the night under constructed shelters. Some of the tasks and bases for day one were, cliff rescue, Snake identification, weather prediction, mapping, attend to a broken collar, construct Spanish windlass, night navigation and many more.

Early following morning breakfast was made and teams hiked down into Cape Town for an Amazing race task where teams had to find certain information in the city. Thereafter all teams boarded the train and travelled to Lakeside station. From there teams had to negotiate a serious climb up Muizenberg peak and down to Baileys Kloof. This sorted out the men from the boys. Teams then went down to Muizenberg beach and along the river back to the Sea Scout Base where the competition ended. Along the way some of the tasks teams had to complete for the day were purify water, sketch of landscape, emergency signals, crack codes, construct wind sock, patrol song, pioneering and many more. It was a gruelling competition and test of one's character and team work. 2nd Fish Hoek managed to clench victory with 2nd Somerset West hot on their heels with a well-deserved 2nd place. Well done to organisers of Rayner 2010. The competition was brilliant. This is a senior competition and it should be rough and tough.