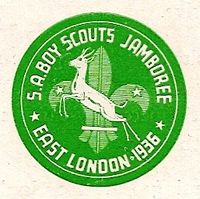 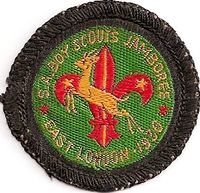 The cloth badge worn on the uniform

The Rhodesians at the First S.A. National Jamboree

THE first South African National Jamboree is now over; our Contingent has returned, and we can now find time to reflect on the work and pleasure of that nine-day camp within sight of the sea.

However, we must begin at the beginning - the journey down. Scouts, Rovers and Scouters from all parts of Northern and Southern Rhodesia assembled at Bulawayo on the morning of Saturday, the 4th January, and after being issued with zebra skin hat-bands, Rhodesian scarves, badges, etc., were paraded for inspection by His Excellency the Governor of Southern Rhodesia, who is also Chief Scout for the territory. During the morning the Contingent were the guests of the Bulawayo Municipality at the Swimming Baths, and were kindly entertained to tea by His Worship the Mayor, Major R. Gordon, D.S.O. (D/C.), and Mr. .J. S. H. Grant (A/D/C.) 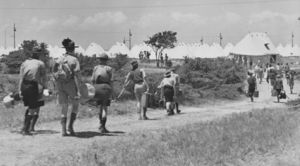 Scouts arriving at the campsite

A huge crowd of friends and parents assembled on the station to see the Contingent away, and it certainly had a rousing send-off when the train steamed out at 7.00 p.m. The accordion band brought down by the Salisbury Rovers entertained us during the trip, and at the larger stopping places organised impromptu dances on the platforms, much to the amusement of the local residents.

The morning of the 7th January was bright and cool as our train pulled into East London station, where we were met by Jamboree officials who had a lorry and buses waiting to take us out to the camp on the Berea road.

The contingent, who were allocated to Sub-Camp "C," soon made themselves useful, the main entrance gateway to the Camp being built by three Rhodesian Rovers and two members of "C" Sub-Camp Staff. I was lodged in the Sub-Camp Headquarters as a member of the Sub-Camp Staff, and Lieut-Col. T. E. Robins, D.S.O., Colony Commissioner, was accommodated at the Jamboree Headquarters. 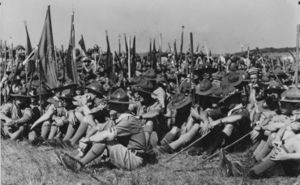 A section of the vast crowd

The contingents in camp were drawn from the Transvaal, Natal, Griqualand West, Cape Border, Cape Midlands, Rhodesia, Moçambique, Cape Western, Orange Free State and Griqualand East. The morning of the 8th January saw the arrival of the other contingents, a constant stream andthe general settling down of the camp, while Thursday morning was a buzz of rehearsals and preparations for the official opening by the Chief Scout in the afternoon.

As a compliment to the only foreign contingent present, the Portuguese led the march past, and our own contingent was honoured with second place. Our contingent looked quite well in the green and white scarves and zebra hat-bands, which imparted a pleasing uniformity of appearance. With regard to our formation, the contingent was headed by Scout C. Nesbitt, carrying the Rhodesia Shield and Assegais, followed by our Standard Bearers with the Union Jack and the Rhodesia Jamboree Flag. They were accompanied by an escort of two Rovers. The flag party was followed by the two contingent leaders, and then the Rovers and our five Jamboree Troops of 32 each with Scouters. Troop Flags were ranged down the right flank. The marching order was "eights," and when drawn up, the contingent looked smart and solid. 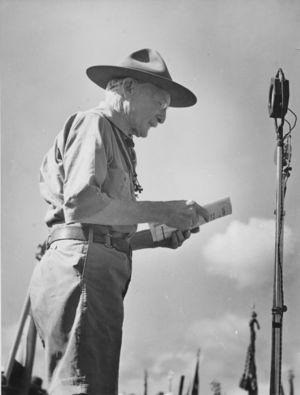 The Chief Scout broadcasting at the opening

The Chief Scout's address was delivered in a strong, firm voice, and the yell of welcome he received and the subsequent burst of cheering was. broadcast throughout the Empire by the B.B.C.

On Friday morning all contingents massed for an impressive march through East London. As in the arena parades, the Portuguese led, followed by Rhodesia, and the route brought the parade right down Oxford Street past the City Hall, where the Mayor took the salute. We were all pleased to see the Chief and Lady Baden-Powell present, seated on chairs in front of the City Hall, and they were accorded a great ovation. The yell raised by the Rhodesians was the same as that used by the first Rhodesian Jamboree Contingent which went over to Wembley in 1924, and it certainly went with a "kick."

On Saturday morning, the 11th January, the Contingent assembled to make a formal presentation to the Jamboree Camp Chief, Major A. L. Pepper, D.S.O., M.C., D.C.M. on whose shoulders rested the responsibility for the whole camp, numbering some 3,400. The memento presented was a Rhodesian leopard skin. Col. Granville Walton, Chief Scout's Commissioner and 'Imperial Headquarters Commissioner for Rover Scouts, was present at this function, and afterwards inspected the contingent and met the Scouters and Rovers.

The arena displays were well supported by the public and some very good shows were presented by the various contingents. A particularly interesting and well-staged item, entitled "The Life of a Scout," was put on by the Cape Western Division, and portrayed all the stages of a Scout from Recruit up to King's Scout. The Cape Western also put on a very good circus as an evening show in the flood-lit arena. This was an excellent entertainment: well dressed, speedy and without a dull moment, for it held a large public audience for over two hours. A decidedly smart physical drill display was given by the Portuguese Scouts, and for which they received very hearty and well-deserved applause.

Unfortunately, rain prevented the Transvaal Contingent from staging properly a very spectacular pageant, which they had been at great pains and expense to prepare. Something like £190 had been spent on the scenery and costumes for this production, and they made a gallant attempt to reproduce as much of it as possible in the covered theatre. This, however, involved the cutting of a number of large scenes.

Our own contributions consisted of items and accompaniments at camp fires, etc., by the accordion band of the Salisbury Rovers, as well as displays of archery and roping by the Bulawayo representatives.

During the camp motor trips through the surrounding country were provided, while visits were paid to the Harbour Works, Water Works and Wilson's Sweet Factory, all of which were both interesting and instructive. Particularly popular were the tug trips across the Bar, kindly arranged by the Union' Castle Company, and despite the sea-sickness suffered by some, others were always ready to go when the opportunity offered. 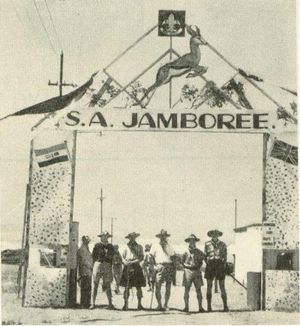 Rhodesian Contingent at the main Gate

Sea bathing was, of course, enjoyed by all as often as possible, and the Selborne Hostel, where the Lady Cubmasters were housed, proved of particular interest to the younger Scouters and Rovers of our contingent, who took a leading part in the organisation of at least two social evenings there.

There are many other things one would like to record in detail, but space will not permit. There was the Gilwell Re-Union which was addressed by Col. Walton and at which some very useful discussion took place in connection with training; the Headquarters Mess Dinner at which I was privileged to be present; the Mayoral Garden Party at Marina Glen at which Lady Baden-Powell as well as the Hon. Heather and Betty Baden-Powell were present; the inter-contingent tug-of-war in which Rhodesia gained second place.

The Plumtree party went down ahead by lorry, leaving Bulawayo on Saturday, the 28th December. The party numbered 13, but despite this they had an excellent journey. They all reported a most interesting trip and were particularly impressed with the hospitality and assistance which they received from Scouts everywhere along the route.

On the last day of the camp representatives from Sub-Camp marched to the East London War Memorial and laid a wreath, the honour of actually placing it being given to a very small member of the Rhodesian Contingent.

Finally, I am sure all members of the contingent will wish me to record their grateful thanks to the public of East London for their generous hospitality and numerous kindnesses.

The largest Jamboree contingent ever to leave Rhodesia has now returned, and has, I hope, maintained the high standard set by those who have gone before it.