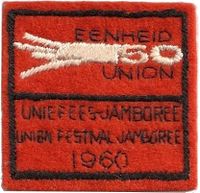 The Jamboree in which 122 of our Cape Western Scouts and 19 of our Commissioners / Scouters participated is past, but not forgotten, because everyone enjoyed themselves thoroughly.

The Cape Western Contingent earned praise from all sides for their appearance, demeanour, behaviour and readiness to tackle any job required of them. The happy atmosphere pervaded the whole Jamboree and contributed in no small measure to the general happy spirit of the camp.

As the Producer of our Pageant Item, run in conjunction with the Girl Guides, coming from Cape Western it is natural that our contingent took the major roles for the Pageant and they had their reward for their hard work, in the praiseworthy comments which came to light subsequently. 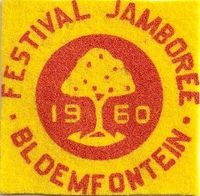 Whether it was natural or not or mere coincidence, they certainly took the lead in establishing closer relations with the Girl Guides. There is no doubt that the two movements should have closer liaison and if our hierarchy are unable to bring this about we suggest they consult our Jamboree boys on methods! It would be invidious to recall some of the stories that were heard - perhaps Scouters could get their boys to tell a few.

During our days in Camp we entertained parties of Girl Guides, Voortrekkers and Habonim (Jewish Youth Movement). These proved to be most entertaining and instructive visits.

Our Scouts were real diplomats and protagonists of Scouting. The train journeys proved to be quite eventful. Our departure from each station was heralded by much noise produced by a bugle, a fish horn and several whistles (not forgetting bosons pipes on the return journey) much to the annoyance of our various Guards. In addition those Scouts without water pistols seemed to be definitely in the minority.

Being able to attend the displays in the Festival Arena, mixing with other boys and girls, having people speaking; both languages, participating with 400 other Scouts from South Africa and South West Africa, in a happy carefree Jamboree, has been an experience which will remain memorable for a long time.

We, in Cape Western, can be happy to know that our Contingent set an example to Scouts throughout South Africa and South West Africa.