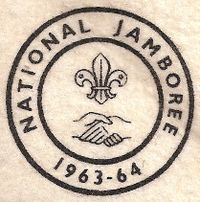 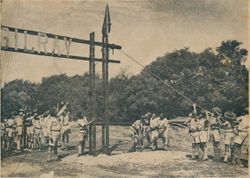 Some of the Boy Scouts attending the second National South African Coloured Scouts' Jamborally seen erecting the gate at the entrance to the Gilray camp site.

The National Jamborally was held from 27 December 1963 to 5 January 1964 at Gilray, Cape. It started with great gusto after the official opening by the Chief Scout Lt. /Col. A. H. Johnstone on Saturday 28th December 1963.

On Saturday 27th, contingents started arriving from the Transvaal, Orange Free State, Natal and Cape Midlands. In all there were 300 Scouts.

Their day started at 6.30 a.m., which is the latest the Scouts may rise. At 8.30 the camp is inspected. After breakfast and 'flag break' the normal day is followed with games, competitions, and obstacles courses in the morning and afternoon. Supper and camp fire follow, with lights out at 10.30 p.m,

A daily news sheet was published in the camp by the Information Staff. 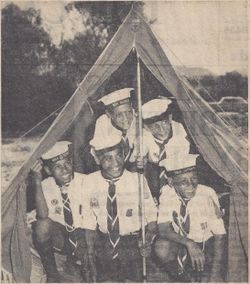 The smiling and healthy looking Scouts took part in games, including three - legged races and in a 'scoutarama' which entailed such tests as pitching a tent·(out of the bag) within two minutes, and constructing a lean-to, which was set alight later and a Scout rescued from it, for first- aid practice.

The Scouts were taken on an all-day excursion to Stellenbosch and Wemmershoek and on the Thursday the Mayor of Cape Town (Mr. W. J. Peters) organized an excursion to Hout Bay for them. They also saw a free film show at a Wynberg cinema.

The 4th of January was the final day of the Jamborally, and open to the Public. An impressive rally was held in the afternoon, and the day was rounded off with a lively Public Camp-fire in the evening. Reluctantly but satisfied the boys departed from Gilray after a final Scouts Own on Sunday 5th January morning having gained many new friends, new experiences and a new spirit.