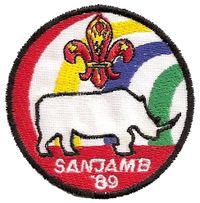 At 18h50 on Monday 11 December 1989 the Trans-Oranje train pulled out of Cape Town station with 135 Scouts and Scouters and 32 Guides and Guiders on their way to an adventure which was a first for most. The long thirty-hour journey to Durban would likewise be a new experience for a large proportion of the Contingent. As the Jamboree was only opening on Thursday, Cape West had a day in hand, so the Contingent was let loose in Durban on Wednesday with the Guides sleeping in the Natal Headquarters and the Scouts in the Drill Hall 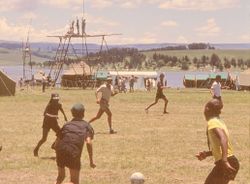 Having been told by the Railways that there was no commuter service between Durban and Pietermaritzburg, our best bet was to get on a third class train to Cato Ridge, from where we could get to Lake Midmar where SANJAMB was being held. So we duly bought tickets. Through the good offices of Darryl McEwan we were able to hire the buses which had taken the Transvaal Contingent to the Jamboree, to take us from Cato Ridge to Lake Midmar, so all seemed under control. But no such luck! There were no trains running so we could not get to Cato Ridge! SATS officials met us at Durban station and after much discussion they arranged buses to take us to Cato Ridge next morning, from Where the Transvaal buses took us on to SANJAMB. 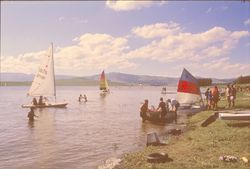 Great weather, sailing on the dam

The-camp was on a private site at lake Midmar, lent by the Natal-Parks Board. The site was well-grassed with a view of the lake which has a shore-line of 43 kilometres.

The Jamboree was opened by Dr Ian Player. Almost 2000 Guides and Scouts were seated in a large marquee. Dr Player's talk, mainly on the need for conservation, struck a serious note. Then came the Chief Scout Garnet de la Hunt who had the gathering laughing at some of his cracks and he was followed by the Chief Guide Commissioner, Mrs Brandon.

Our three Troops were each allocated a sub-camp. Altogether thirty-two Cape Western Scout Groups were represented at the Jamboree.

During the day there were some fifty activities available. Some were very popular, especially the water activities; the Commando Course where there was keen competition to make the fastest time; two muddy obstacles to be negotiated, and the mud-wrestling which was even popular with the Guides. (How did they manage to clean their hair of mud?) Frisbee games organised by the 1st Pinelands Troop Scouter also proved popular. 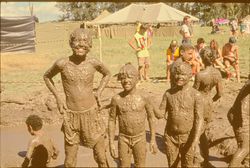 Mud wrestling was popular amongst the younger Scouts

Every evening there was entertainment in the marquee. Among other things there was a Barn Dance, an Illusionist, Folk Singing, a Rock Group and on the last evening, The Blarney Brothers, which was a wow!

The weather was, on the whole, kind, with a warm day in Durban, a downpour of heavy rain during the opening ceremony, a terrific thunderstorm one night and to cap it all a fierce wind which had the whole camp hanging on to tents and marquees on the closing day. It came at suppertime and did not abate until it had torn the main marquee to ribbons. So the closing ceremony was held in the open. At the end the candles were lit and everyone moved away into the evening twilight. This was an excellent SANJAMB and the Natal and Kwazulu Area is to be congratulated on the smoothness which marked the running of it. Graham Barkus and his Committee did a good job.

To get the connecting train back home, we were dropped off at Pietermaritzburg Station just after 09h00. Our train was due at twenty to eight that evening and even then it was an hour late. So we sat, most of us, on that station for a solid twelve hours. The Scouts and Guides were allowed to go into the city but as there was not much to do there they soon came wandering back to the station.

The long trip home culminating in a big welcome by parents and friends at Cape Town station, ended a great adventure. Our thanks to Jerry Wilding, Contingent Leader, for his smooth organisation prior to departure and on the trip. Everyone should, I think, have had a good time.