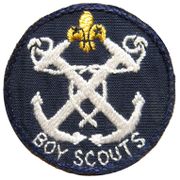 The first Sea Scout group in the Cape, 1st Table Bay Sea Scouts, was formed in 1921 with their Scout Hall in Woodstock.

The earlier attempts at finding a base for Sea Scouts

The Table Bay Sea Scouts had one small rowing boat and had permission to moor it under the Pier which in those days projected into the sea from the bottom of Adderley Street. The group was later renamed 5th Woodstock.

Development of the Sea Scouts was slow, mainly because of the need of boats and somewhere to store them so that they could used regularly. This resulted in the Sea Scouts doing ordinary Scouting with the minimal proper training on the water.

The first permanent base was in Table Bay harbour, but unfortunately there was a lot of opposition from the parents who feared for the safety of the boys amongst the shipping, with the result that the base was seldom used. In later became the home of the Cape Town Naval Cadets.

By 1968 there were eight Sea Scout Groups in the Peninsula, all looking for somewhere to store boats and equipment. The Scouters therefore got together and approached the City Council for a suitable site on the banks of the then developing Sandvlei. This was granted, and about the same time Mr Peter Irving (Rocky) was appointed as Assistant Divisional Commissioner Sea Scouts. Rocky was true to his word when, at his first meeting with the Scouters, he said, "I am a man of few words, but when I set my sights on something, I usually get my way." Under his leadership the Sea Scouts went from strength to strength.

The mastermind behind the planning of the base was Mr Nick van Gysen and very soon there was a hive of building activity. All the buildings were built by the Scouters, Scouts and willing parents, 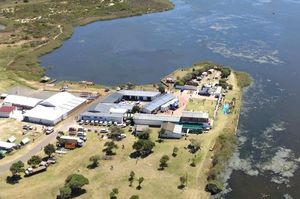 To quote Neville Coxon:- At the time of the opening the fleet of boats was a nondescript lot. The best of them was the 14-ft Admiralty sailing dinghy of 1st Fish Hoek, bought from H.M.S. Afrikaner, and the two Red Wings of Muizenberg and Plumstead, the rest were ex-lifeboats which the Scouts sailed extremely well. Two old wooden lifeboats were given to us by Irvin and Johnson; these were done up by the Scouts and sailed. The one was later rigged with the sails and mast of a Sharpie, and sailed very well, until one day a boy rammed an Xtra with it. Needless to say there was nothing wrong with the lifeboat. We also had a few odd monstrosities which were more inclined to sink than sail, making competition difficult, and a standard form of training impossible, without proper boats.

Once accommodation was available, Commander Boyle of 2nd Simonstown offered us the use of a mould to make our own boats. These are the Saldanha Dinghies now in use. We constructed 12 complete sailing dinghies at R500 each - the cost of materials only. Subsequently I personally delivered the 12th hull to the Transvaal Division who handed the hull to Mercury Marine to manufacture five boats for their Division. Also six five-meter Indian-type canoes were moulded during the last three months of 1973. This boat-building has stimulated sailing interest in the Scouts.

Over the years many improvements have been made to the Base and it has become a very valuable asset to the Region.