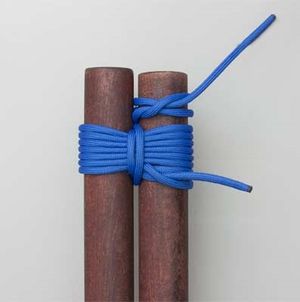 The Shear Lashing (also spelled "Sheer Lashing") is used to lash the ends of two poles together. The other ends are separated to make a pair of Shear Legs. This Lashing is widely spelled both "Shear" and "Sheer", and is also called Shear Lashing Mk1, with Shear Lashing Mk2 referring to the Round lashing.

Shear legs support weight. A single pair can be controlled with a rope as they lean over a stream to lift a bucket. A series of them can support an aerial walkway.