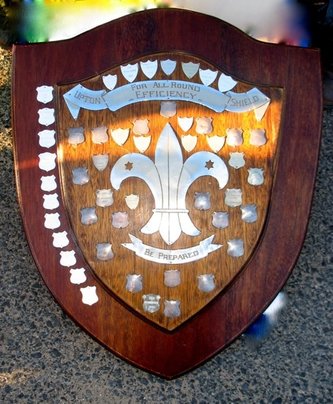 The Upton Shield is a Regional Scout competition for junior Scouts, aged 11 - 14.5. It is in the format of a day hike, which can be held anywhere within reasonable driving distance of Cape Town. Scouts compete by completing a number of bases and Spare Time Activities (STA's).

The history of the Upton Shield

In the early days of Scouting in South Africa there were separate Divisions for Black, White, Coloured and Indian Scouting. The Upton Shield has its roots in the then Coloured Division, but unfortunately most of the records of the old Coloured Division have been lost when their Headquarters in Caledon Street Cape Town burnt down.

With the passing of time there is now virtually no one left who remembers the history of the old Coloured Division and their competitions. However we are most grateful to Winston Adams, who was their past Divisional Secretary in the late 1960's for the information he has passed on to the Heritage Team.

The history of the Upton Shield goes back to 1950 when it was donated by Mr Upton who was the District Commissioner for what was then called the Northern Suburbs - Bellville – Goodwood - etc. It was an annual proficiency competition 'For All Round Efficiency' for Coloured Scouts to compete against each other matching their skills in camping and scoutcraft and was won for the first time in 1950 by the 1st Salt River Troop.

In the 1970's the separate Divisions combined to form one Movement. To preserve the heritage and legacy of both the Upton Shield and the Gordon's Shield, which were of a similar nature, it was agreed that; The Upton would now be a hiking Competition for younger Scouts (not yet 15 years old or eligible for the Rayner Trophy Competition) and the Gordon's Shield would be or continue being a camping skill proficiency Competition for Patrols.

Today the Upton Shield is the premier annual event on the Scouting calendar for Scouts under 15 years of age and some of the exciting venues have been, Cape Town city bowl, Silvermine Nature Reserve, slopes of Devil's Peak and along the coast from Kalk Bay to the Sea Scout Base, to mention a few.