This was called the Jubilee Jamboree as it celebrated Scouting's 50th Anniversary. It was the first time that a Jamboree for Scouts, Indaba for Scouters and Moot for Rovers, was incorporated into one event and referred to as the J.I.M. Jamboree.

Our Contingent numbers are a little difficult to accurately confirm, but there is a photo of 55 Scouters attending the Indaba, a listing of 18 Rovers attending the Moot, and approximately some 300 Scouts attended the Jamboree.

Also for the for the first time, Scouts from Indian, Coloured, African (Black) and White sections of the SA Scout Movement attended as one Contingent, under the leadership of the SA Chief Scout. 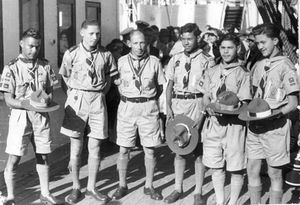 On Thursday 4th July the Cape Western section held a farewell party in the Metropolitan Church Hall, where they were addressed by the Chief Scout Mr. E. Percy Fowle, and on the Friday 5th July the whole South African Contingent was given an official 'Farewell Tea Party' by the Mayor of Cape Town, Mrs Joyce Newton-Thompson.

That afternoon the 380 Scouts sailed for England onboard the Union Castle Mailship Stirling Castle and would be away for 98 days, returning on the 10th October.

As the boys would be away for three months, a Scouter Schoolmaster ensured that revision of school work was carried out, as they would be writing exams soon after returning to their homes.

The voyage by ship to England was via the island of Las Palmas and took 14 days to complete, arriving in Southampton on the 19th July. Here they were met onboard by the Mayor of Southampton, a representative from SA House and various other civil and Scouting dignitaries.

They then boarded a train to Chingford which is within walking distance to Scoutings Gilwell Park, which was their base and tented accommodation for the next 12 days.

Some of the time spent at Gilwell was used to rehearse the Arena display under the guidance of Colin Inglis (who founded the Senior Scout Adventure in 1969 and became Chief Scout in 1977) and to practice the Theatre item by "Impie" Bryant (Commissioner Emeritus in October 1992). The rest of the time was spent on extensive and very well organised sightseeing tour of London and surrounds and they probably saw more of London than the local Londoner sees.

On the 31st July a special train took the Contingent to Sutton Coldfield Station, from where they marched through the town to the Jamboree site. The streets had been decorated with flags and lined with crowds of people who clapped as they marched past. A separate area was allocated for the Indaba Contingents.

Initially the weather was hot, but as with previous Jamborees it soon started raining and with it came the mud, only this time it was black mud due to the black peat. The official Opening Ceremony of the JIM was performed on the afternoon of the 1st August by Prince Henry, the Duke of Gloucester with the firing of a cannon. The Queen and the Duke toured the various campsites by car and looked in at the campsites. Although our Contingent was scattered over 5 Sub-camps it did not hamper the fraternisation which was the keynote of the JIM, and this was encouraged by the interchange of visits, international tea-parties, meals and badge swapping.

There were 3 500 Scout Leaders at the Indaba which consisted of serious talks, sing-songs and very popular was the huge marquee called the 'Indaba Club', where they met in the evening for informal discussions. The Scouters had come to experience camp life and were rather loath to leave it for the excursions. At one of the campfire's the participants were addressed by both Lord Rowallan (UK Chief Scout) and Lady BP, and at another the South Africans did some 'Volkspele' (Traditional Plays).

Apart from the in camp discussions, displays, campfires and fraternisation, the highlight of any World Rover Moot is the Rover Hike. More than 2 000 Rovers left Sutton Park to hike for three days in the mountains of Wales and Derbyshire. The inclement weather did not dampen their sprits and many of the routes ended near Aberystwyth in Wales, where a large campfire was held. It was quite an international affair with more than 2 000 in attendance, including local dignitaries and Welsh Choirs. 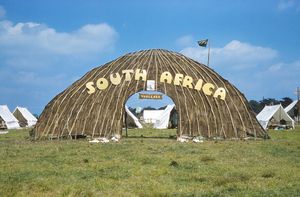 Every afternoon there were Scouty arena displays and in the evenings displays by special performers. There is much on the Internet covering this Jamboree, but the focus is about our Contingent, so here follows the South African display directed by Colin Ingles which consisted of a series of carefully worked out drills.

At the call of "South Africa - South Africa" the Scouts burst in and erected an encampment so quickly that it was finished before one was aware of what was happening. On completion, all the boys were in five formations as perfect as any that could be Imagined, and the orange, white and blue flag of South Africa was broken to the well-known Jamboree Song.

The second scene was a very spectacular display of the South African Flag set out with coloured hats accompanied by their wearers who quickly formed up in the correct pattern.

At the quiet blow of a whistle the performers formed a perfect circle to outline a setting for the third scene, which consisted of a dance by native mine workers associated with the Gold Mines. This dance accompanied by native song was called the "Gum Boot Dance" and finished with a hearty yell.

The fourth consisted of a pageant of the various settlers who had come to South Africa including Dutch and English, these were dressed in very beautiful and typical costumes of the period. There was also a small Contingent of the English Army in their red uniforms who went to South Africa in the late 1840's to keep the peace between the warring tribes, and these were followed by an odd collection of farmers and other traders, who settled and overcame great hardships.

This pageant was rounded off by a very fine and slick display of pioneering by all the settlers showing us bridges, signalling tower and camp equipment.

The whole display was completed by a most beautiful parade of Basotho blankets which are very, very colourful and also very warm we are told. It is quite impossible to describe the incredible variety of colours and designs displayed by these blankets. A static South African display was their HQ tent. Here they entertained the other countries' Contingent Leaders, as well as the Mayor and many other dignitaries, where the Scouts had made traditional SA Koeksusters and Melkterk, etc.

The closing J.I.M. Ceremony on the Monday 12th August was an evening affair with Lady BP giving the famous closing speech:-


The end is only the beginning 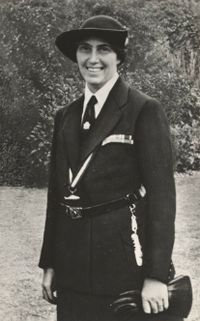 The night sky has darkened . . . the lights of many lamps flood the arena illuminating the thousands of upturned faces amid the kaleidoscopic sea of uniforms . . . spot-lighted on the dais before the Royal Box stands the blue clad figure of Lady Olave Baden-Powell, the World Chief Guide. She is greeted with tumultuous applause and then a great silence descends on the assembly as she speaks:

In this lovely county of Warwickshire, in the green heart of England, we are all gathered together tonight for the last time in Sutton Park – a name that will be spoken and written in many tongues in many places for many years to come.

In a few hours time we are all going our several ways, and a wave of regret sweeps over us as the time comes to say goodbye.

Here in this camp we are thinking more particularly today of a happy man, a man who, fifty years ago, had ended an eventful career in the Army; and that end was the beginning of what we see around us today, of which this great Jamboree-Indaba-Moot and our World Camps of Guides have been but tokens –millions of boys and girls, men and women, of every colour, creed and country, living together as brothers and sisters under one promise and one law –that Promise and Law given to us fifty years ago by our Founder.

He left this earth some sixteen years ago and that end was indeed only a beginning. For you too, as you come to the end of this wonderful Jamboree tonight, the end is truly only a beginning. For these two weeks you – Scouters and Scouts of so many different lands and so many different languages – have lived in harmony together, forgetting all the differences which separate and thinking only of the ties which unite you all in the great world brotherhood of Scouting.

So may the end of this Jamboree be but the beginning of a new 'reaching out' of left hands everywhere, and a carrying to the world outside some of the Jamboree spirit of fun and friendship.

Your Founder was one of the happiest of men because he knew the great truth that happiness comes not from what we have but from what we give and what we share.

You do not need me to tell you this, for you are preparing as Scouts to live lives – long ones I hope – of giving, out of the best that is in you, and of self-sacrificing duty to God and to your fellows.

Then when your time comes to go hence you too will be able to say: "The end is only the beginning".

Her speech and farewell ended, the World Chief Guide invited all to re-affirm their Scout Promise in there own language.

The lights dimmed and suddenly from out of the surrounding darkness, many brilliant fireworks blazed and crackled their way skywards. It was the moment that thrilled the hearts of young and old alike.

The lights returned to reveal an unforgettable scene when the great mass of Scouts surged forward as Olave, Lady Baden-Powell retired to the Royal Box. Cheer upon cheer filled the air – a moving demonstration of love and affection for the gracious lady who, for many years, shared in the work of that great Englishman and citizen of the world who gave the game of Scouting – and Guiding – to the boys and girls, men and women of all nations.

The tremendous volume of prolonged cheers finally gave way to the strains of the Jamboree song as the Scouts spontaneously formed themselves into international groups, linked arms and marched away from the arena for the last time.

At the close of the J.I.M., there was the opportunity to visit relations or make use of Home Hospitality until the 20th when the Contingent returned to Gilwell Park for the British and Continental Bus Tours.

The 8 day tours of Britain were organised by the British Boy Scout Association and were of a sightseeing and educational nature, travelling as far as Scotland and included places like the Lake Districts.

The last few days were spent back at Gilwell where a senior Scouter had been continuously available for executive decision making. The last night in England was spent at Charterhouse School, before travelling to Southampton to board the Stirling Castle and to see the Scout pennant flying at the yardarm.

The return journey was quite relaxed as it was obvious everyone was tired. The only essential requirement was that the study periods be observed, and that all should dress in full uniform for dinner. They arrived back in Cape Town on the 10th of October 1957.