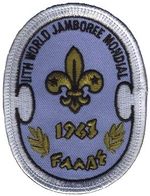 This was the first time that the S A contingent did not sail by 'Mailship' from Cape Town and the Cape Western Division took the train to Johannesburg to meet the rest of the Contingent, where preparations were being made for the flight to Italy. The chief problem seemed to be getting their abundant luggage down to the prescribed limit of 44 pounds.

Pre Jamboree Tour
The official scribe for Cape Western was Aaron Domingo and he reported:- "They took off in the S.A. Airways DC7B at about 15:00 on Friday 12 July and headed for Turin in Italy, landing en route at Nairobi, Khartoum and Rome. Two huge Fiat Pullman Buses met us at the airport and took us to our hotel. These buses, driven by two of the finest drivers we've undoubtedly encountered, were to take us the length of Italy during the next seventeen days. Neither time nor space will permit of telling you about all the places of historical interest we visited, of the magnificent sculptures and paintings, buildings and factories and the museums we saw. Suffice it to say that all of this was of absorbing interest.

The South African Contingent with the Jamboree campsite in the background

Our journey took us from Turin to Lake Como, Venice, Florence and the wonderful city of Rome, out to Mount Vesuvius, Pompeii, Naples, Amalfi and finally Brindisi. We'd lived in hotels, pensions, student houses, youth hostels and naval barracks. We were made most welcome wherever we went and our fellows responded with glad friendliness, dignity and courtesy, and our Italian hosts were duly impressed. We had enjoyed our visit to their lovely country, with its wealth of fine buildings, art treasures and friendly people. We'd enjoyed the food which was always good and plentiful.

It was with sorrow that we bade our two staunch friends, Italo and Aldo, the drivers of our buses, farewell at the airport at Turin. They'd been wonderfully kind, thoughtful and resourceful during their long journey with us, and it was evident that they too were sad to lose their large family. 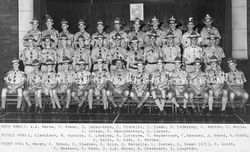 The Jamboree
Arriving at Athens airport on 29th July, hosts of Greek Scouts welcomed us and the formalities of customs and passports were soon completed. We were all eager to get out to Marathon and start erecting our camps, but owing to a bus strike in progress in Athens, we only reached camp at 21h30 that night to find that our luggage had gone astray.

Here we were met by Ann and Stuart McPherson and Ian Appleton from Cape Town, who were attached to the Jamboree Headquarters Staff. With their kind assistance our luggage was eventually located at 01h30 the next morning. Temporary accommodation was obtained and a very tired Contingent hit the plains of Marathon at about 02h00. But next day all was bustle and activity, wind and dust, as Contingent after Contingent arrived and set about getting their campsites in order for opening day, Thursday 1st August. Our two Troops, Lions and Buffaloes were allocated to sub-camps Plataea and Hippothoudis respectively, whilst Headquarters Staff went to sub-camp Delphi.

A fantastic selection of gateways was soon erected and then flag after flag of the various nations represented - 86 in all - began to wave proudly above their camps. What a grand sight it was to see these flags, signifying the true unity of Nations attained through the medium of the Brotherhood of Scouting. The Opening Ceremony, led by the Chief Scout of Greece, Crown Prince Constantine, Duke of Sparta, was an impressive affair, attended by the whole Jamboree.

The greatest impression was the campsite's spaciousness

By this time our Chief Scout, Col. Johnstone, had joined us and we were able to share with him participation in all the events at Marathon. On Monday 5th His Majesty King Paul of Greece took the salute at a march-past of all Contingents and on Sunday 11th after our Scouts Own, where our Chief gave the yarn, the Closing Ceremony took place, again in the arena. We were honoured to have Lady Baden-Powell address the throng, followed by Crown Prince Constantine who stressed the theme of the 11th World Jamboree - "Scout Higher and Wider".

We think back on all the interesting activities arranged for the scouts to tackle e.g. "The Labours of Hercules", the Talent-o-Rama, Stamp Collectors and many more. Swopping was perhaps the most vigorously pursued activity, for apart from the articles gained, it was certainly grand to meet felons from so many different countries sharing a common interest - their love for Scouting. What grand campfires we shared and what a variety of campfire items and stunts we saw. We invited our neighbours to have a meal with us and we in turn went to eat with them. The Springbok skins were a wonderful bartering agent, and the South Africans, after three weeks training at this pastime in Italy, were considered shrewd bargainers.

And then there was the mammoth task undertaken by our members to prepare a vast quantity of Koeksisters for our party, at which we entertained delegates from all the other nations with our Chief and Mrs. Johnstone acting as host and hostess. Here each delegate was presented with a stone from Mafeking, which had been collected and mounted on plaques by the Rovers of Natal. Their wonderful handiwork was greatly appreciated by every recipient, who thought the idea a splendid one.

General Poole, the S.A. Ambassador and Mrs. Poole visited us and their thoughtful gesture was greatly appreciated. We were also glad to see Fatty Rutter, his wife, Bobby and Mrs. Nuns.

Touring Greece
The day of departure from Marathon, Monday 12th August, meant parting from many new friends, but the journey about to be started, on our trip through Greece, softened the unpleasant business of saying au revoir. The World Scout Conference in Rhodes robbed us of the company of our Chief Col. Arthur Johnstone, our Leader Ian Fraser and our three Commissioners Naicker, Aaron Domingo and Mack Shange. So we headed for Pattras in two buses. We got as far as Itea the first night, far short of our destination, as one of the buses had broken down. This became a much too familiar feature of our Grecian tour, but it did nothing to daunt the wonderful spirit of cheerfulness and good humour of our Contingent. On the contrary, it seemed to add a bit of spice to the adventure.

We continued our journey visiting Olympus, Tripolis, Sparta, Mystra, Nauplion, Mycene, Corinth, the Corinth Canal and Athens. Next on our itinerary was a fantastic trip by ferry boat, the "Angelica" to Crete. It was simply incredible to see the number of passengers that boarded the craft. We had quite a job on both the outward and the inward trips to obtain and retain a sleeping place on the upper deck.

Our over-night port of call was Hiraklion where we visited the ruins of Knossos and a most fascinatingly interesting museum thereafter. We boarded "Angelica" about 10h00 next morning after an all too brief visit to Crete, and reached Piralus at 10h30 next day, Monday 19th August. During our trip through Greece, one of our Company, Stephen Loughton, became ill and we left him in hospital at Aegion in the care of two Scouters "Padda" Bezuidenhout and John Harvey. Another chap, Christopher Moyle developed a severe allergy which the doctors in Athens were unable to identify. He had further treatment at Hiraklion and both patients had fortunately recovered by the time we returned to Athens. There we were reunited with our Leader Ian Fraser and the three Commissioners who had accompanied him to the World Conference on Rhode Island. The contingent was once again at full strength and in high spirits.

We made ready to depart for home on the 20th, but our plane was delayed in Rome, having developed engine trouble. S.A. Airways then installed us at the Acropole Palace Hotel in Athens where we spent two wonderful days in the lap of luxury. A plane was eventually chartered from U.A.T. the French Airline which at last brought us safely back to Johannesburg via Fort Lami in Chad and Brazzaville.

A memorable journey ended at Jan Smuts (Johannesburg) Airport at 02h30 on Saturday 24th August, where we said hasty farewells to the chaps from other parts of the Republic. The Cape Contingent spent the few remaining hours of darkness at the Y.M.C.A. again, and entrained at 10h30 for Cape Town where a large gathering of friends and relatives awaited us as the train pulled in at 14h30 on Sunday 26th August. It was good to see them again and after the preliminary "hallos" had been said, the Cape Contingent gathered for the last time. They were addressed and dismissed by our Divisional Commissioner, Mr. Alex Masparo. It was a wrench parting from the grandest lot of chaps anyone could wish to meet.