Appleton Scout Camp is unique in its position and beauty. A small camp, situated on the ridge of Signal Hill, it offers unobstructed views of the Atlantic Ocean, Cape Town, Lions Head and Table Mountain. On a clear day one can see remarkably far. It is perfectly suited to smaller groups who do not want to travel long distances to be with nature. The facilities include toilets, bunkhouse, kitchen, sink, fridge, stove and some extra electrical points. Gas cooking is a good option as well, so bring your own. A fire pit and braai area built with a magnificent view over the city lights and Table Mountain, offers the very best of campfire camaraderie. A large lawn (big enough for tents, cricket or soccer) completes the camp-site itself.

Various hikes along and around Signal Hill offer a wealth of knowledge and beauty. There are various ruins, the Noon Gun and Malay Kramats as well as unique fynbos, grey duiker, black aagles and even rooikat (caracal). The climb up Lions Head commences one kilometre from the camp. A round trip to the summit and back usually takes approximately three and a half to four hours.

What is particularly unique about this venue is the total seclusion, yet its in close proximity to Cape Town and Sea Point. Almost an island, it allows Scouters to have a direct comparison with the love of nature and the often short-sighted ways of man. A carefully planned camp, structured along this theme, can prove absolutely invaluable in teaching our children the true meaning of the eco-system and inter-dependency.

Scouting is many things to many people, but one aspect always shines through: respect for our Earth and for humanity. Appleton Camp is a place to reinforce this principle.

History of the Appleton campsite 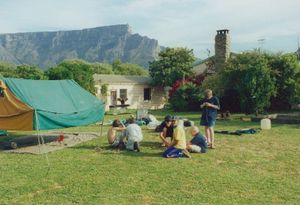 Ideal for Scout campers (photo by 1st Claremont from about 2000)

It was the base for the Special Signals Services who were developing a new technology called RADAR (RAdio Detection And Ranging).

On 14 May 1941 equipment to set up a twin mobile radar set arrived on Signal Hill. Due to the secrecy the Army knew nothing about them and no accommodation, rations or, more importantly, helpers had been arranged. However Naval personnel at the adjacent Port War Signal Station helped with rations and accommodation.

Unfortunately, due to the secrecy surrounding radar during the War, and the deliberate destruction of papers after the War, no formal, authoritative history of the site or of the Special Signal Services unit exists. (Ack: The Heritage Portal)

The Kramat of Tuan Kaape-ti-low

On and around Signal Hill are several Kramats, which are burial sites of historic Muslim leaders from the early days of the Cape Malay community in South Africa. These graves or shrines are maintained by the Muslim community and visited to pay respect to the leaders buried there. In Appleton Scout Campsite is the grave of Tuan Kaape-ti-low. He is believed to have been a general from Indonesia who was exiled to the Cape by the Dutch in the late 1600s. The grave is surrounded by a stone wall with a low gate. It was one of 11 kramats declared national heritage sites in 2021.[1][2][3]