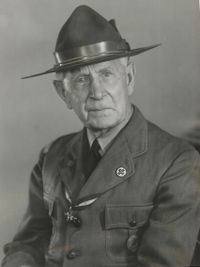 Dr Frederick H Dommisse 'Jan' or Hawkeye as he was known in Scouting passed away on 3rd May 1960. He would have reached his 87th birthday in the July. As recently as last October, he drove himself into town and visited us at Scout H.Q., but soon after, his health began to deteriorate, and it was a sad occasion for him when he found himself unable to attend our Rededication at the end of January.

It was then that the Chief Scout South Africa, established the rank of Emeritus Commissioner for those who could no longer remain active Scouts, and whose service and example had been of National importance. 'Hawkeye' was the first to hold that rank. Dr. Dommisse was a holder of the Silver Wolf (now called the Silver Springbok) granted to him in 1940.

We offer our sympathies to all members of his family.

Footnote: The first Scout Mountain Club Hut on Table Mountain opened in 1945 and used until 1960, situated in Diamond Valley (today Ash Valley) near the Wynberg reservoir, was named the Dommisse Hut (today the Ash Valley Hut) after Dr. Dommisse our Divisional (today Area or Provincial) Commissioner at the time.

Also, the present day Rover Hawkeye Competition started in 1948, was named after the then Divisional Commissioner Dr Dommisse or 'Hawkeye' as he was called in Scouting.