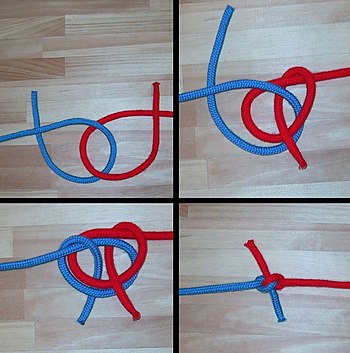 Hunter's bend (or rigger's bend) is a bend knot used to join two lines. It consists of interlocking overhand knots, and can jam under moderate strain. It is similar to the Zeppelin bend.

Good for slippery synthetic fibre ropes but is more prone to jamming than the Zeppelin bend.

When assessed against other bends in tests using paracord, it was found to be:

In October 1978, it was presented as a newly invented knot credited to Dr. Edward Hunter. who had used it for years to tie broken shoelaces. When it appeared, it led to much publicity for the knot and also to the formation of the International Guild of Knot Tyers.

It had already been presented in Knots for Mountaineering by Phil D. Smith in the 1950s where the bend was described as a modification to the alpine butterfly bend. Smith had devised the knot in 1943 while working on the San Francisco waterfront and had called it simply a "rigger's bend".