The north magnetic pole is a point on the surface of Northern Hemisphere at which the Earth's magnetic field points vertically downward (in other words, if a magnetic compass needle is allowed to rotate in three dimensions, it will point straight down). There this occurs, near (but distinct from) the geographic north pole.

The north magnetic pole moves over time according to magnetic changes in the Earth's outer core.

Its southern hemisphere counterpart is the south magnetic pole. Since Earth's magnetic field is not exactly symmetric, the north and south magnetic poles are not antipodal, meaning that a straight line drawn from one to the other does not pass through the centre of the Earth.

All magnets have two poles, where the lines of magnetic flux enter and emerge. By analogy with Earth's magnetic field, these are called the magnet's "north" and "south" poles. The convention in early compasses was to call the end of the needle pointing to Earth's north magnetic pole the "north pole" (or "north-seeking pole") and the other end the "south pole" (the names are often abbreviated to "N" and "S").

The direction of magnetic field lines is defined such that the lines emerge from the magnet's north pole and enter into the magnet's south pole.

Part of the carta marina of 1539 by Olaus Magnus, depicting the location of magnetic north vaguely conceived as "Insula Magnetū[m]" (Latin for "Island of Magnets"), off modern-day Murmansk. The man holding the rune staffs is the Norse hero Starkad ("Starcaterus").

Early European navigators, cartographers and scientists believed that compass needles were attracted to a hypothetical "magnetic island" somewhere in the far north, or to Polaris, the pole star.[2] The idea that Earth itself acts as essentially a giant magnet was first proposed in 1600, by the English physician and natural philosopher William Gilbert. He was also the first to define the north magnetic pole as the point where Earth's magnetic field points vertically downwards. This is the current definition, though it would be a few hundred years before the nature of Earth's magnetic field was understood with modern accuracy and precision.[2]

The first group to reach the north magnetic pole was led by James Clark Ross, who found it at Cape Adelaide on the Boothia Peninsula on June 1, 1831, while serving on the second arctic expedition of his uncle, Sir John Ross. Roald Amundsen found the north magnetic pole in a slightly different location in 1903. The third observation was by Canadian government found the pole at Allen Lake on Prince of Wales Island in 1947.[3]

The movement of Earth's north magnetic pole across the Canadian Arctic in recent centuries, continuing in recent years across the Arctic Ocean towards Siberia 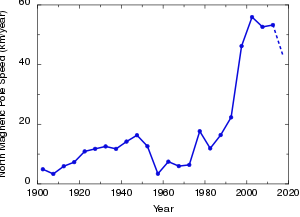 The Canadian government has made several measurements since, which show that the north magnetic pole is moving continually north-westward.

This general movement is in addition to a daily variation in which the north magnetic pole describes a rough ellipse, with a maximum deviation of 80 km from its mean position.[4] This effect is due to disturbances of the geomagnetic field by charged particles from the Sun.

Magnetic declination from true north in 2000.

Historically, the magnetic compass is an important tool for navigation. While it has been widely replaced by Global Positioning Systems (GPS) many aeroplanes and ships still carry them, as do sailors and hikers.

The direction in which a compass needle points is known as magnetic north. In general, this is not exactly the direction of the north magnetic pole (or of any other consistent location). Instead, the compass aligns itself to the local geomagnetic field, which varies in a complex manner over Earth's surface, as well as over time. The local angular difference between magnetic north and true north is called the magnetic declination. Most map coordinate systems are based on true north, and magnetic declination is often shown on map legend so true north can be determined from north as indicated by the compass.

Like the north magnetic pole, the north geomagnetic pole attracts the north pole of a bar-magnet and so is in a physical sense actually a magnetic south pole. It is the centre of the region where the Borealis can be seen. As of 2015 it was located at approximately over Ellesmere Island, Canada but it is now drifting away from North America and toward Siberia.

Over the life of Earth, the orientation of Earth's magnetic field has reversed many times, with magnetic north becoming magnetic south and vice versa – an event known as a geomagnetic reversal. Evidence of geomagnetic reversals can be seen at mid-ocean ridges where tectonic plates move apart and the seabed is filled in with magma. As the magma seeps cools, and solidifies into igneous rock, it is imprinted with a record of the direction of the magnetic field at the time that the magma cooled.