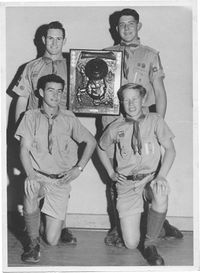 Twenty teams reported to Mr. Colin Inglis the Chief Judge at Melkbosstrand on Saturday March 4th and were sent off along the beach in a northerly direction. On the way they had to carry out certain tests and after some three miles hiking in a strong south easter they reached their destination and were told they had been shipwrecked and had salvaged certain articles of equipment and food, the rest had. to be handed over to the Chief Judge for safe-keeping.

The spot was not as desolate as had at first appeared. There were many bushes which gave shelter, but many teams seemed to prefer being among the dunes and rather exposed. The whole idea was to test the ability of the teams to live under such circumstances. All water had to be carried but there was a test of distilling sea water which could supplement the supplies. A chicken was given to each team at the start and they had to look after it until Sunday when they had to kill and cook it. One billy per team was allowed for the making of coffee and porridge. All other meals had to be cooked either over the fire or in foil.

Each team had to build a bivouac, rig up a flagpole with a distress signal so that searching ships could find them, a smudge fire to guide overland parties, and an air distress signal for the plane. The plane, a light one, flew overhead three or four times on Sunday morning coming in quite low and dropping a message giving hope of an early rescue.

Other tests included boiling an egg in a paper bag and fire lighting with the leader having his hands tied behind his back and the other three being blindfolded. Water had to be boiled on this, fire. A sausage raft had to be made. One of the team had to be rescued from the see. Another lost all his clothes and he had to have some permanent ones made for him. Night star work, day directions, a windvane, tracking, observation and other tests made up the 40.

The competition was a tough one which tested the endurance of the teams, but in spite of the many difficulties most of the Scouts enjoyed themselves, those who had not had much practice in this type of programme fell by the wayside as they lost heart, but all credit must be given to the team who had only two members and yet battled it out to the end, their spirit undaunted. Such is the stuff some of our Scouts are made of.


The Chief Judge, Mr. Colin Inglis, is to be congratulated on a very fine competition which in every way came up to his masterpiece of last year.