Route: Bainskloof and the Witte River 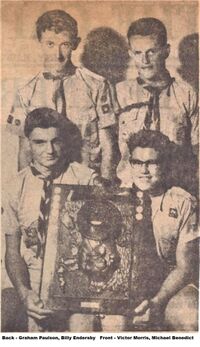 The Rayner Senior Scout Competition for 1962 was held over the weekend 2-3rd March 1962.

Last year the competition took the form of a shipwreck on the desolate coast of South West Africa 'Skeleton Coast' and tests were designed to use the skills necessary to survive in such circumstances. This year the competition consisted of a tough but interesting hike on the Saturday afternoon up the Witte River from Bains Kloof Hotel to the campsite in the Witte River Valley not far beyond Hugo's ruined house. It is an ideal site in a mountain setting with a large pool and grove of trees for campsites. Away from civilisation and the public, it provides ideal country for senior scout venturer activities.

Teams met at van Riebeeck statue at 1 p.m. on Saturday and were given instructions to proceed to Bains Kloof Hotel. Here they were started off by teams and told to proceed up the river which includes wild and attractive scenery. They were required to map the river bed and report on one feature of interest encountered. In order to give all teams an equal chance of reaching camp at the same time no other tests were included on the hike. The performance of the teams on this hike clearly indicated which Troops include hiking in their senior scout activities.

Tests included a rescue from heights involving first aid, stretcher making and carrying at night, which on average was very well done, and on Sunday morning a Venturer Badge Course.

Judges.
F.B. Bryant, R. Ritchie, p. Leibrandt, D. Sinclair-Smith, M. Goldman, C. Sinclair-Smith and N. Weller assisted me with the judging. They proved a good team blending long experience with the enthusiasm of youth. I am grateful for their able assistance.

The teams of the second 2nd Claremont scratched and Team No. 10 4th Claremont did not turn up.

It was necessary to declare two teams No. 14 2nd Kenilworth and No. 16 1st Claremont non-competitive owing to the inclusion in the teams of boys under 15 years despite a clear statement of qualifications necessary on the application form. Team No. 11 had a senior scout drop out at the last moment but Team No.16 deliberately entered an underage team with one member at least only 13. In my opinion it is completely wrong to ask junior scouts to attempt to cope with activities designed for tough 16-year-olds. This Troop should be officially reprimanded. Next year special warnings will have to be given in the 'Cape Western Scouter'.

Results. The Rayner Competition results were as follows:-


General.
My impression was that, taken on the whole, the standard was higher than that during the last two years. It is noticeable though that when the tests are on orthodox scouting training teams cope quite well, but when unexpected or unusual tests are set, as in the shipwreck scheme last year, some Troops come out far better than others. It becomes clear which teams come from Troops with imaginative and good Scouters who provide variety and adventure in their Troop programmes. and which come from Troops that do nothing but the laid-down Scout Tests.

The spirit and determination shown by the teams was excellent in spite of the fact that they were hard pressed during the whole weekend.