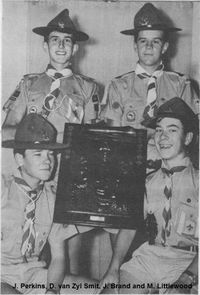 The Rayner Trophy for Senior Scouts was held over the weekend 16/17th April,1966, in the mountains between the top of Du Toit's Kloof Pass and Bains Kloof.

The teams were instructed to assemble at 1 p.m. at Van Riebeeck Statue and were then directed to the top of Du Toit's Kloof Pass where the competition proper commenced.

Theme:
The general theme of the competition was that the teams were Patrols of a U.S. Marine Commando in Vietnam carrying out night patrols in search of Vietcong guerrillas who hide during day and emerge in the night to attack villages. See attached instructions to Patrol Leaders for the briefing.

Intention:
The main body of the competition this year comprised a very tough night hike across the mountains during which teams carried out tests and overcame obstacles. It was felt that this type of competition would thoroughly test the scoutcraft, leadership and spirit of the teams, and would be a unique experience. to most of the participants. Also, night scouting tends to be neglected in Troops and therefore this type of test might encourage Scoutmasters to pay more attention to this aspect of the training of their boys.

Competition:
After the usual inspection at the head of Du Toit's Kloof Pass, kits were weighted to ensure that no boy was carrying excessive weight in view of the long. hike ahead. Along the path to the Krom River Mountain Club Hut teams were tested in conventional signs, first aid pressure points and a series of prismatic compass bearings and orientation of map. Weather was fine but cold. On arrival at the Hut, they were requested to make a scale drawing showing plan side elevation and end elevation. A fish was given to the teams at Du Toit's Kloof Pass which they had to cook without the use of utensils or aluminium foil. Teams had been given no instructions to set up camp but most of them did so assuming that this would be the campsite for the night. Meanwhile the Judges had set off across the mountains to the large pool on the Witte River, taking up their stations and setting up tests on the way.

Teams left in the dark using torches after a careful briefing by me on the route and safety precautions to be observed, in the order that they finished the fish test and. breaking the striking of camp. Weather was cloudy but later cleared. The teams proceeded over a nek and then commenced descending a very rough valley requiring route finding. The first test consisted of a string trail with 24 articles suspended from sisal four feet above their heads. No warning was given of the items above and at the end of the trail, they were asked to write down what they had observed. As might be expected, some teams saw nothing and others saw them all.

They then proceeded some distance over rough country to the next Judge where they were required to repeat a message given them at Du Toi t 's Kloof. Further on teams crossed a rope 10 feet above the ground between two trees with their kits. Further on towards the Witte River a morse message was flashed by lamp and they then proceeded to the pool where four tests were staged. The first was skin diving with an under-water torch in a 10-foot-deep pool where they had to retrieve an object. This was well done and accepted. The other tests included underwater Kim objects placed on the bottom and observed through water by torch-light, a time message test and a 'poisonous eel' stunt in which they had to erect a flagpole in a prohibited area which they were not allowed to walk on.

Leaving the pool, they then proceeded down the Witte River Valley and, on the way, followed a trail of Marbles across the mountainside, teams having to report the number observed, and later teams had to stalk quietly between two Judges posted some distance apart.

Heavy rain fell during the early morning. The teams weathered this very well.

Sunday
The first test which was the preparation of Welsh Rarebit, was judged. at 10 a.m. and was followed by an adventure course consisting of a first aid rescue from the bottom of a 15 foot deep, narrow trench with ropes, cooking an egg in a tree at least 10 feet off the ground, the construction and crossing of a monkey bridge, the erection of a flag-pole as high as possible out of scout staves, and the dealing with an electrocuted person, including mouth-to-nose respiration, using the proper equipment.

STA's comprising an animal trap to catch, kill and bury a meerkat; a musical pipe, a plaster cast of an ear, a bow and arrow with demonstration, and a sonnet about the Rayner were judged at 2 p.m., and the teams, after cleaning up campsite then hiked to the Bains Kloof Hotel.

The weather on Sunday morning was misty with rain showers from time to time.

Half of the Judges had had experience of Rayners before and the majority were selected because of their mountain experience and ability to cover the tough ground involved. They formed an extremely efficient team and the smooth running of the competition is in no small measure due to their cheerfulness and proficiency.

Results:
The results were as follows:


General:
This was the most strenuous and tough Rayner Trophy that has been held, and the spirit and determination of all the teams without exception was quite outstanding. Although the going was hard, weather conditions by no means ideal and by the end of the night hike they were tired, not a single word of complaint or sign of giving up was evident. In fact, the spirit throughout was exceptional. In this respect it was an outstanding performance by the team.

Generally speaking, the overall efficiency was good, except I would like to make the following comments on certain tests:

(1) Not a single team knew how to give mouth-to-mouth or nose-to-mouth respiration. The equipment used, specially designed for the purpose, will only work if the head is tilted back in the proper manner. Not one team managed to inflate the rubber bag representing the lungs. I suggest Scoutmasters' attention be drawn to this gap in their training.

(2) Prismatic compass and map orientation. The prismatic bearings in general were done correctly, some teams making the usual mistake of adding instead of subtracting to obtain true bearing. However, the orientation of the map and pinpointing of their own position was very badly done, and only one team managed to locate their position on the map. Some teams located themselves as far away as De Doorns in the Hex River.

It was noticeable that the physical size of the boys competing was smaller this year, which may be due to their being younger than normal.

Thank you for inviting me to run the competition.