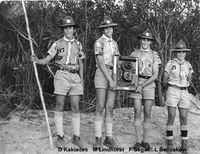 Senior Boy Scouts from all over the Western Cape took part in "anti-terrorist" activities in the Tygerberg hills at the week-·end. They were competing for the Rayner Trophy - a test of physical fitness and specialized Scouting ability.

The competition consisted of a series of 15 terrorist situations. First was a sea-rescue of 20 exhausted men on a raft off Milnerton beach.

Most of the "Incidents" took place on Sir de Villiers Graaff's farm De Grendel, and in the surrounding Tygerberg hills. One operation was to rescue a parachutist who had come down in tall trees and was dangling in his harness.

A vehicle which had been driven into a mine field and then developed electrical trouble had to be reversed back on its tracks. The mines were all charged with half-charge explosives and "flashed" if disturbed.

In another operation a limpet mine submerged in water had had to be made harmless.

About 80 Scouts in teams of four took part in the competition.

Winners were the First Green and Sea Point Troop with 185 marks out of a possible 200. Second were First Pinelands and third First Meadowridge. Fourth were Second Somerset West.