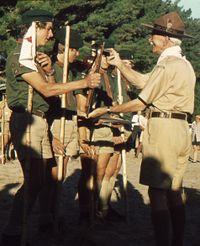 Patrols hiked with full kit from Tokai Manor House up to the Elephants Eye Cave and across the plateau to the Silvermine Reservoir, where supper was cooked. The route then continued across Ou Kaapse Weg, past the waterfall, onto the eastern side of the Silvermine Valley, and down to the sleeping area at the Groot Silvermyn farm.

On the Sunday morning the patrols continued to the dunes and crossed them into Fish Hoek, from where transport (a welcome break in the tension) took them to Sunnydale. They hiked from there over the hill to skirt da Gama Park, and up to the filtration works near the Lewis Gay Dam. After the final test (orienteering) the patrols hiked to the old Botha camp on Red Hill for the presentations. Total hiking distance was not less than 14 miles. (23Km).

Judges.
The large staff of judges fulfilled their duties most capably, despite the fact that half of them had no previous experience of a Rayner. For the record, they were -

Especial thanks are due to - Colin Inglis and Impie Bryant for help with the planning of the competition. Alan Shinton for 1001 duties. David Lawson for exploring the route with me.

Results. 2nd Rondebosch were worthy winners of the Trophy, from a field of 24 patrols who participated.