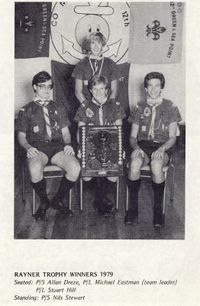 The competition was held over the. weekend 17/18 February.

There were 27 teams on the event of which seven were "B" teams. Nine teams did not make the starting point. All in all 20 Groups were represented.

The theme of the competition followed the lines of 'In search of the Kruger Millions'.

The teams started at Steenbras Station at 15h00 on Saturday after assembling and receiving final directions from Bellville Station. Here they were welcomed, introduced, inspected and given a teaser before setting off.

A short walk brought them to the top of Gantouw Pass where they were tested on logic and the Scout Laws. Following the tree line (easterly) they encountered a Kim's Game, a drowning rescue and a beautiful panorama (which they had to record) overlooking Eikenhof Dam. The terrain thus far was fairly level with a clear break between tree forest and natural vegetation. The weather at this stage was deteriorating to the drizzle stage. At 18h45 the first teams arrived at Eikenhof where they were met by judges and given instructions and explained the set-up. Late night bases were visited after supper which was of a high standard and shelters had been built. The bases were aimed at testing team work/leadership and were chiefly of a pioneering variety.

Early Sunday teams set off towards Nuweberg in heavy rain and were instructed to take the higher of two crossing. Along the way they met test bases. Some teams took a wrong turning (in sequence!) and this resulted in the omission of some tests. Others doubled back but lost valuable time. After passing through Nuweberg teams passed up into the Kathleen Murray Reserve before dropping to the lunch-spot at Pofadder Pool in the Riviersonderend Kloof.

The rains had caused the river to rise considerably and this slowed progress considerably. It was discomforting to watch judges assisting 'small' Scouts across the river at some points. Teams assembled at the weir before marching en masse to the finish point. Unfortunately, the river descent went slower than planned and the finish was delayed by 35 minutes. Very bad P.R. let down but totally unexpected. My apologies.

Permission at short notice was granted by Mr P Wilson of the Department of Forestry who was most courteous and helpful far beyond the call of duty as they say. The use of the Eikenhof Centre and Forestry pathways and roads were of extreme help.

The small staff of judges were most competent and certainly by their spirit ensured the spiritual and morale success of the competition. They were - G de la Hunt; N Osbun; D Woolley; R Goldschmidt; K Wall; J Mutti; F Flowers; P Marsh and F Harris. Robbie Feyder did the recording, and catering for judges, and an ASM G Lyons and senior Scout P Abrahams from 1st Green and Sea Point assisted where needed.

A special thanks must go to Kevin Wall for the amount of help he rendered prior to the event and also to Frank Flowers who assisted at very short notice. Thanks also to yourself for help and backing prior to the event.

Analysis of tests: The first few tests were either inspections or teasers to get the teams split up slightly. Of these uniform and kit averages were over 80 and this is a good indication of a smartening up of uniforms. Teasers in the form of a basic code and word assembly game ware poorly done. A scientific question involving forces and distances proved too difficult for the average team. Tests along the road. such as Kim's Game (65), mouth to mouth (75) and the panoramic sketch were of satisfactory standard.

Shelters were well constructed by some teams but totally inadequate by others. The S.T.A.s produced very low results, some teams perhaps deciding bases are more valuable to do. The model coracle test, as demonstrated at Springbok Troop mid-1978, was a disaster all round.

A series of pioneering based projects produced 50 averages and were generally well done with good team work. Leadership is an aspect which needs strengthening in most teams. Sunday's tests were all well done and a high standard was maintained. These tested leadership and gave the individual a chance to 'do his bit'. Some good pancakes were produced (66) and knotting seemed adequate (61). Other test averages of 60- 65 require no special comment.

Observations: I found the teams tired dramatically towards the Sunday afternoon, especially those with Scouts of small stature. The route was overall easy hiking and the tests geared to the average to good type of Troop. I felt that the application of actual Scouting skills was low viz. observation, improvisation and woodcraft knowledge. One wonders if this is perhaps the result of too many diverse activities keeping Troops away from basic Scouting.

Conclusion: In conclusion I would like to thank you for allowing me the privilege of a crack at this premier event. I can assure you that I gained tremendous experience. Finally, I would like to close with a 'thank you' to yourself and the Headquarters staff for support prior to and throughout the event.