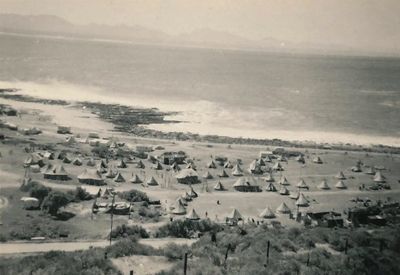 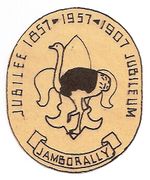 This Division's first big Jubilee event, the Mossel Bay Jamborally, from Saturday 1st to Thursday 6th April 1957, was from all accounts a big success.

There were 426 in Camp from our own Division, Natal, O.F.S., Kimberley, Transvaal and Midlands, quite a representative gathering.

The opening ceremony was performed by the Mayor and three rockets, one of which also did some performing in the air. But it was a good start and in spite of some bad weather at times everyone present had a good time. We have also heard from residents of the town that they too enjoyed the campfire, some 200 of them attending.

We hear stories of many activities including a senior adventure, with ropes and hazards in an old quarry. Just the right thing to end a camp such as this. Many tests were passed besides the other activities which attracted the interest of the boys.

The daily Newspaper, 'The Jampoint', was read with interest even by the townsfolk; Serpent (Carl Rayner) did a grand job in editing this. 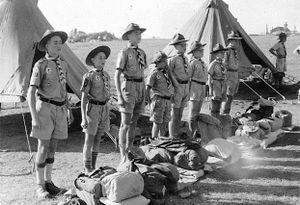 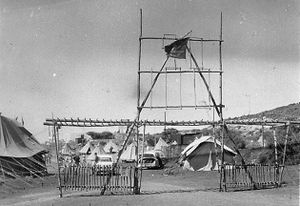 The local committee did a lot to make the camp a success and Thanks Badges were presented to Mr. K. Andrews, the Mayor, to Mr. A. Kibur, Chairman of the L.A. to Mr.A.de Villiers, Vice Chairman and Mrs. de Villiers the District nurse.

The thanks of all must go to Mr. E. Rutter (Esmond 'Fatty'), Camp Chief, for all his hard work. His efforts both before and during the Jamborally, ensured its success.