A great skill to have is to be able to find North and South at any time of the day or night, without needing a compass or cellphone.

For this, you'll need an analogue watch.

Illustration of a method to identify north and south directions using the sun and a 12-hour analogue clock or watch set to the local time, 10:10 a.m. in this example, for both northern and southern hemispheres, with and without daylight saving. 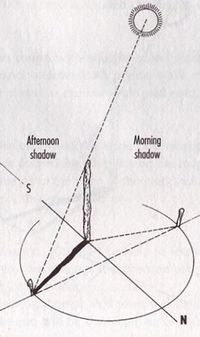 To find north, you will need:

This is actually why method 1 and method 2 above work. We are drawing an imaginary line across the sky from East to West, and using the time to determine where on the line we are currently.

In the Southern Hemisphere, the sun moves across the sky to the north (since we are south of the equator). This means that shadows are generally facing south. The south side is generally cooler, which is favoured by moss on trees. If one side of a tree has more moss on, it is likely to be the south side of the tree. This is also a reason why people prefer north facing houses - so they have more light.

If you know the direction of the prevailing winds in an area, you'll be able to estimate direction from the natural angle of trees. In areas where there are strong winds, such as the South Easter in Cape Town, many trees tilt by being pushed by the wind. In Cape Town, the trees often tilt away from the South Easter, and point North West.

Method 1: Length of the axis

Take the length of the long axis of the Southern Cross, and repeat this length 4.5 times. At the end of this imaginary line, drop vertically to the horizon which would be an estimate of South.

Extend the axis of the cross like the tail of a kite, then intersect with a line bisecting the pointers. The point where the lines intersect is very close to the south celestial pole where the earth's axis points into the southern sky. This pole is visible anywhere in the southern hemisphere and lies directly south.