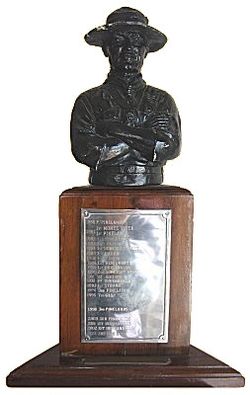 The Quinn Trophy is aimed to be a fun competition that includes not only the whole Scout Troop, but also may involve family. There are a number of activities throughout the day, some testing Scouting skills, and others purely for ompetitive fun. The competition is usually hosted in October each year. It is usually held on the same day, just after the Cape Times Cross Country Competition.

The history of the Quinn Trophy

The Quinn Trophy was donated in 1980 by the Area Chairman at that time Clifford Harris. It was named in honour of our very first Area Commissioner at that time (previously we were a Division with a Divisional Commissioner), Frank "Kudu" Quinn. The 'Quinn Trophy' was and still is intended to be a 'fun event' for whole Troops teams. Scouts and supporters should attend and enjoy themselves with a certain amount of informal competition.

It is hoped that every Troop in the Region, no matter how small, new or inexperienced, will enter in all or even some of the day's team activities offered – just for the fun of it. Groups should encourage parents and friends to attend in a picnic like atmosphere, which would also help foster Group togetherness.

The Quinn Trophy is normally run on a Sunday in October each year, together with or as part of the JOTA (Jamboree on the Air) weekend. Many venues were used over the years like 'Brownsea Island' near Sandvlei, Rondebosch Common, but mostly our own Regional Campsites from Gilcape, Sandvlei, Gilray and in recent years combined with the Hawequas annual 'Open Day' or 'Free Camping Weekend' at Hawequas.

Also running concurrently with the Quinn Trophy, but as a separate Trophy not counting towards the Quinn, is the Cape Times Cross Country Competition going since 1924. The course is about 4km long and is split into a Junior (11 to under 14 years) and Senior (14 to under 18 years) section.

Troops would arrive and leave in full uniform, changing to camp easy clothes during the day event. The competition normally ends with a short Scouts' Own before the final parade, and the overall winner of the Quinn Trophy is the Troop that fares the best in all the fun activities offered on the day.