It is not uncommon that the history of some organisations is kept in a dark unwanted location, sitting on dusty shelves in battered boxes, its members unaware of its existence. Many years ago, this certainly seemed the fate of Western Cape’s Scouting past, resting peacefully within the Regional Headquarters, but this was to change.

Where it all began 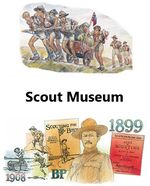 During the period 1965 to 1982 Mr Carl "Serpent" Rayner became the first Archivist to venture into the hidden past. He spent many hours sorting, reading and making a pathway that others would follow. In 1970 he took on the task of writing up the Western Cape Scouting History from 1908. Well into his eighties with his task completed, 'Serpent' as he was fondly remembered, passed away in 1982.

Work then stood still until 1990 when Alan Shinton took over as Archivist. He was to explore and catalogue the over 90 years of Scouting in the Cape. It was Alan's idea to create a Museum and display Scouting's hidden treasures.

On Heritage Day 2000 the museum section was opened by the Colin Inglis and to acknowledge Carl Rayner's contribution, his Granddaughter opened the reference library which was then named after him.

The museum's stay was however short-lived as the building was sold and after two weeks the exhibits were packed away and moved to the new abode in Goodwood. Then came the mammoth task of sorting out all the boxes containing the museum artifacts, archives, and library into their new locations.

Sunday 25 November 2001 saw the re-opening of the Scout Museum by Andre Bredenkamp the Area Commissioner. The Western Cape Scout Band was in attendance and guests were able to view the exhibits.

Alan passed away in November 2004, but his legacy lived on.

By 2007 social media and the Internet were upon us and the Heritage Centre had just one webpage, but that was soon to change. Retiring from the corporate world and with the team down to just Denzil, John and Jock they were joined by Stuart Ravenscroft who applied his IT skills in digitising and indexing many of the records. Scouring the archives to record our long Scouting history he created anecdotes sourced from the records of those South Africans who were witness to these historical events. Most of these accounts had never been published before.

The next reorganisation of the Museum display area came when the Western Cape Office relocated to Rondebosch in early 2013. Once again many of the exhibits were boxed as the floor space was reallocated to accommodate a lecture hall. With the interior freshened up the Training Team moved in and we became 'Gilwood'.

Unpacking and placing the memorabilia then took place giving both the museum and the training area a genuine 'Scouty' feel to the building. This time there was even more Scouting memorabilia as the collection from the National office was transferred to the museum at Gilwood.

Mick Hatton was the next to join the heritage team and much of the redecorating was done by him. Not only were his practical talents put to good use, but he has done great work in the archives.

Andre Foot who for a long time had been helping Stuart with his IT graphic skills, upon retiring in 2015 spent many hours reorganising the display cabinets.

In 2016 the Eastern Cape Scouting History collection, consisting of the old Border Area (East London) and Midlands Area (Port Elizabeth) was transferred to Gilwood by Andre and Stuart with the help of Edna "Tiny" Packwood the Port Elizabeth Scout Archivist. This collection has its own display area within the museum.

John Potter with many years of Scouting to his name joined the team in 2018.

The Museum - represents an exciting, unique, and colourful repository for an exceedingly large collection of Scouting memorabilia, much of it exclusively South African.

The Library - Possibly the largest collection of Scouting books in the Southern Hemisphere. We even have an original 1899 'Aids to Scouting' - the book on which 'Scouting for Boys' was based.

The Archives - goes back to 1908, a large catalogued collection of documents, newspaper cuttings, scrapbooks, personal logbooks, photos, 'slides' and even letters written by BP himself.

By arrangement, the museum can be opened for visitors to Cape Town. Should you wish to know more about the Museum, please contact Eleanor Brown - eleanor.brown@scouts.org.za