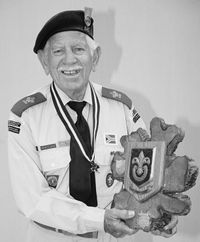 Many of us knew Ed Rose by his Scout name, "Beaver". Even most adult members of the Scout Movement knew him by the same name.

He started out in the Scout movement as a Cub in the 5th Woodstock Cub Pack and attended the Edward Shield for the first time when he was a 10 year old Cub. The competition was held at Keurboom Park near Newlands. Later, he joined the 1st Table Bay Sea Scouts where he was to become a King Scout. He attended many Springbok Scout presentations over the years and it was always rather amusing to be able to refer to Beaver as a King Scout along with Queen Scouts and Springbok Scouts who may have been present.

Back in 1931 he went down to the Cape Town harbour, to the quayside, where he met the Union Castle ship, the Kenilworth Castle, and none other than Lord Robert Baden-Powell at the start of BP's tour of South Africa. Beaver actually shook BP's hand. In 1936 he visited the National Jamboree in East London which was also attended by BP.

He joined the Entertainment Corps of the South African Army during World War II. His interest in entertainment was something that was to come out later in his Scouting career, when he was always keen to organise or take part in a gig or a campfire. He loved singing campfire songs and would run District and Group campfires. Beaver of course liked the traditional campfire songs and one that he would always sing was "Ging Gang Gooli".

He was the District Commissioner of CW1 until 1957. One of the activities of this District at the time was an outing of Cubs and Scouts to Robben Island.

He was also involved in the founding of 2nd Bergvliet in 1963 after being approached by Father Duffy. He would regularly attend AGM's and Springbok presentations. He would be interviewed by Cubs doing their Lion test called "Interesting People".

Beaver married Hazel or "Ricki", the name we knew her by and they formed a formidable Scouting team in the 70's and 80's and did great work in the old CW20 District.

He was a member of the 1st Gillwell Troop having completed his Scout Wood badge under Impie Bryant, who was the course director, in 1961. In 1968 he completed his Rover Wood Badge and Colin Inglis asked him "to do the Rover job" and he became the Assistant Area Commissioner for Rovers. He later went on to become the National Commissioner for Rovers, a post he held until ill health forced him to step down. Passionate about the Rover branch of Scouting he always had a keen interest in the growth and progress of Rovering. He was a supporter of girls in Rovering and saw to it that the Scouting folk in South Africa were brought round to agreeing to this a number of years ago.

When Beaver was the District Commissioner for CW20, in the 70's and 80's he used to organise District wide games. He organised a show at the 3 Arts theatre to raise funds to send two Scouts from the CW20 District to the 13th World Jamboree in Japan in 1971. He also organised the Cook and Despatch Rider proficiency badge courses for Scouts in the district.

He started the well known "Beaver Rose Trophy" which is a District competition for Scouts in the Two Oceans' District. This kicked off in 1965 and has been run every year since then. Beaver was always proud of this fact. Here, at the competition, he influenced the lives of many Scouts who today range from their teens to fifties. He was present at every single competition, except for one when he was living in Johannesburg. He organised the competition every year, even when he was in Johannesburg, from its inception until 3 years ago. Beaver always enjoyed campfires and I will always remember a certain campfire skit which involved Scouts staring at the ugliest person in all of Africa, who was appropriately dressed. The first Scout went up to look at this person and fainted. The second Scout also went up and looked at this same person and also fainted. So too the third, fourth and so on. Beaver then came up and looked at the ugliest person in all Africa and the ugly person then fainted. This demonstrated the affection the Scouts had for Beaver and how he was willing to be part of the fun and have his leg pulled.

He would often come up with Scouting skills and ideas which I, and possibly others had never heard of before, one being a star fire which although documented in Scouting for Boys by BP, had escaped me. Another skill was floating a banana, which had been fashioned out into a boat, down a river. Yet another was how to "hone an axe" and the reaction was yes I do own an axe and what about it? I was later to find out how to sharpen an axe next to the swimming pool filter at the Scout campsite, Gilcape.

He and Henry Hodgkiss served on the Gilcape Property committee for 16 years. He was on the Adult Training Team for many years and was often involved in training of Rovers until fairly recently when ill health forced him to step down.

He received the highest merit award a uniformed Scouter can receive, this being the Order of the Springbok. Beaver was involved in Scouting for over 75 years. Although Scouting was a huge part of his life, he also assisted Bergvliet Primary school and was for a time the caretaker of the school, which his granddaughter Michelle attended.

To Sue, who ensured that her dad's interests were protected, especially in his later years, to the staff at Rusoord, we thank you for looking after Ed "Beaver" Rose.

To Sue and Michelle we extend our heart-felt condolences.

Beaver was a Scouting stalwart and legend. We celebrate your life, you will be missed and never forgotten. Beaver has gone home. May he rest in peace.

Nigel Forshaw, Scout and Scouter in the CW20 and Two Oceans District, 4 August 2008